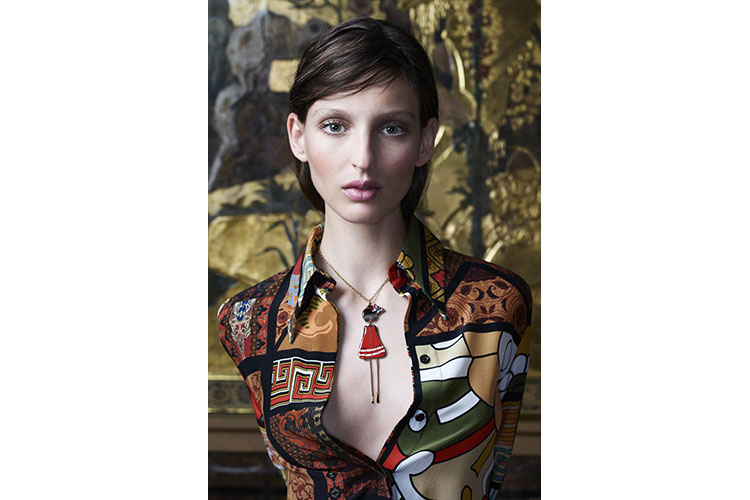 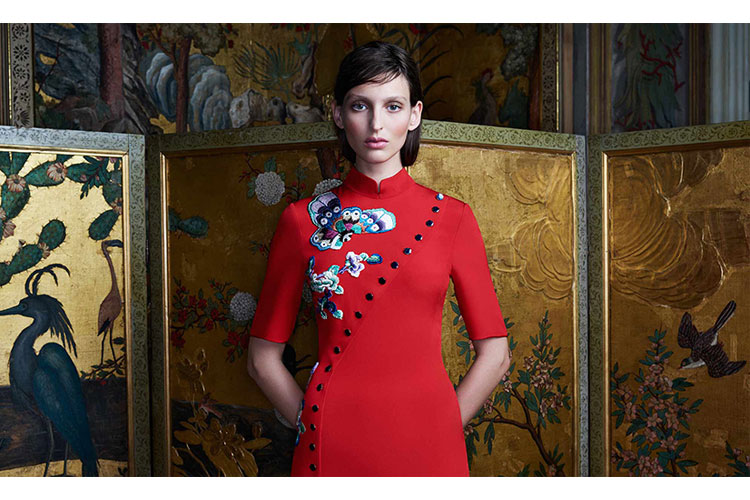 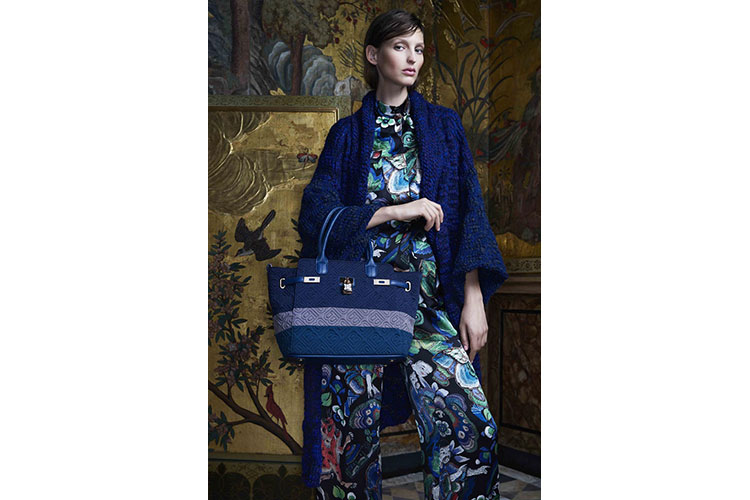 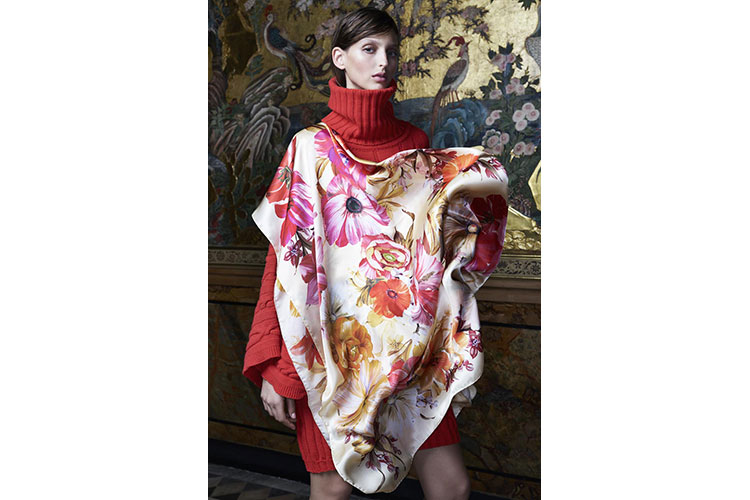 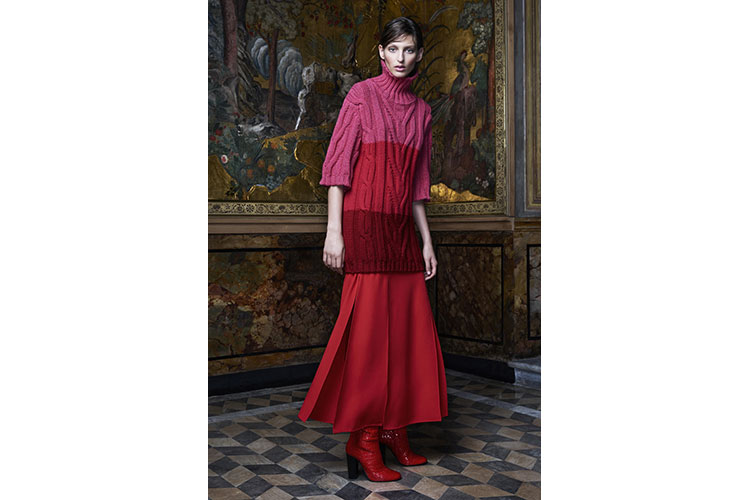 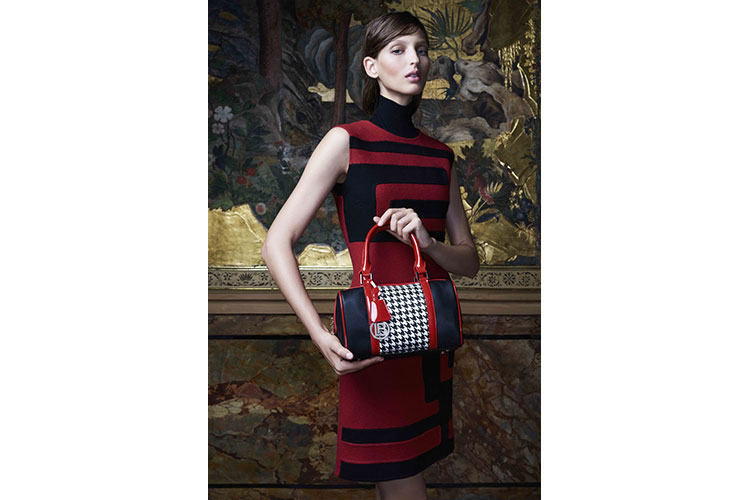 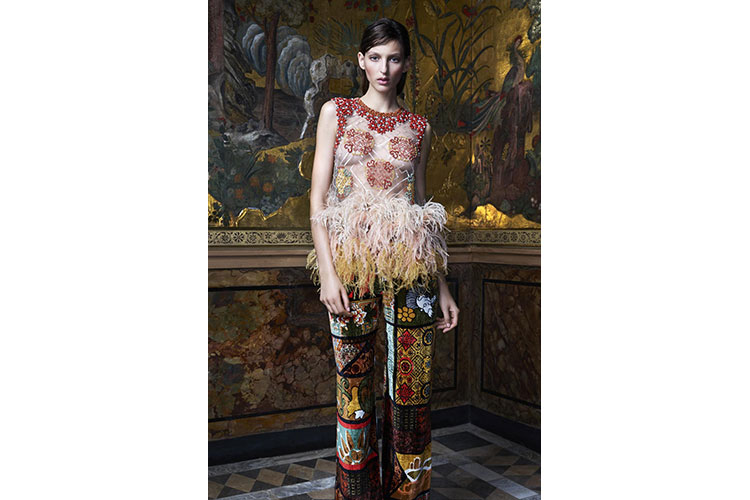 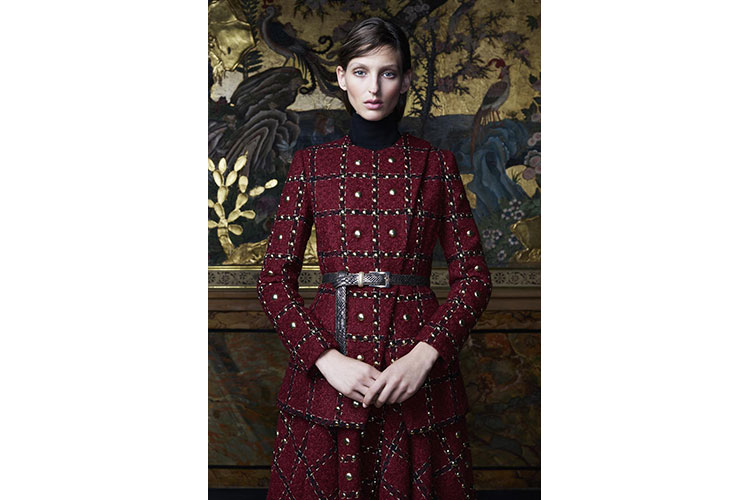 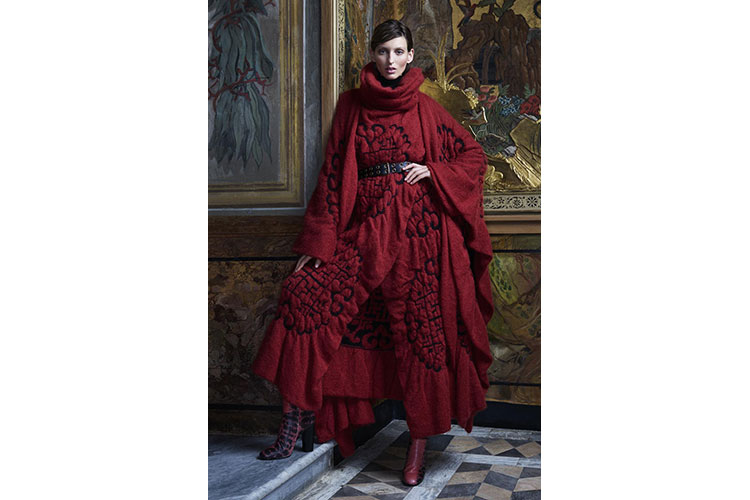 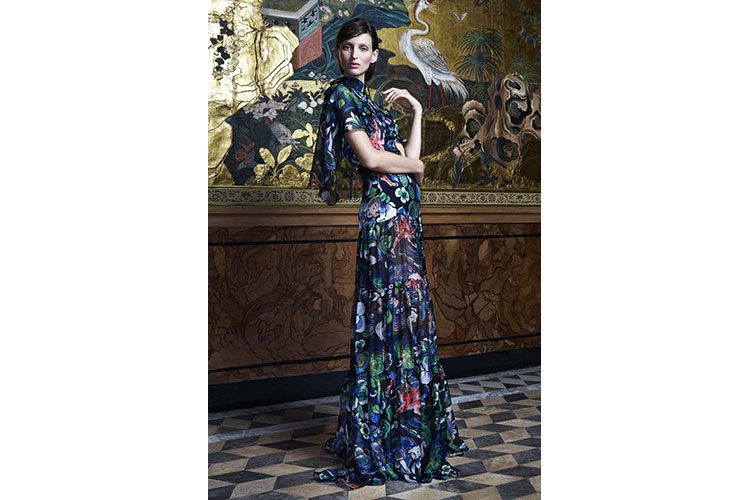 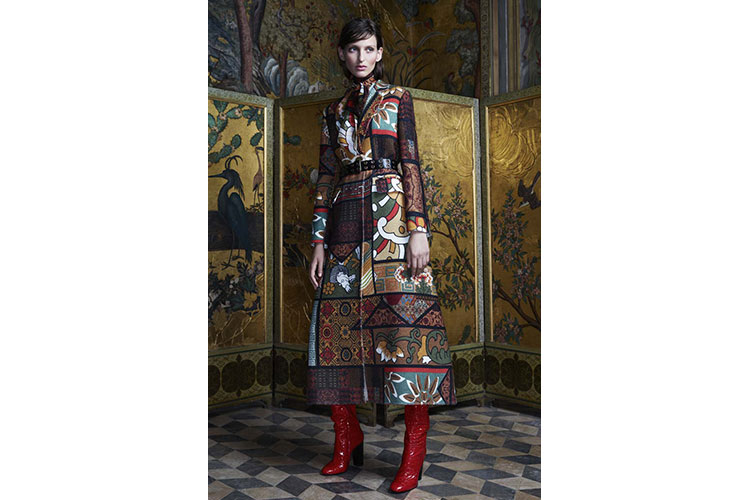 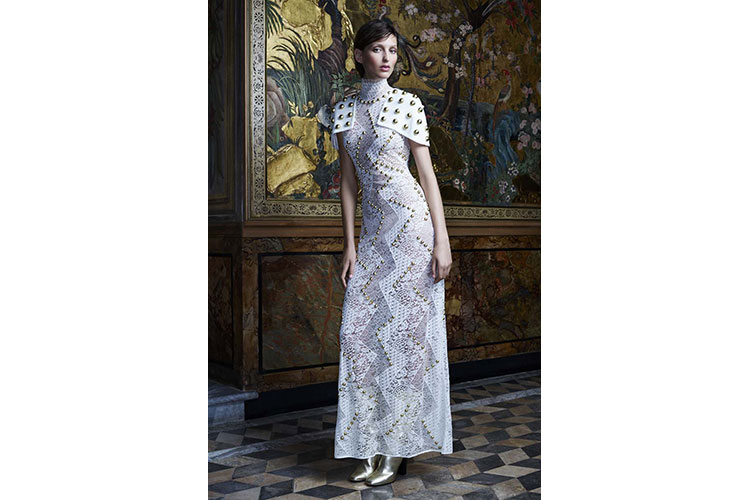 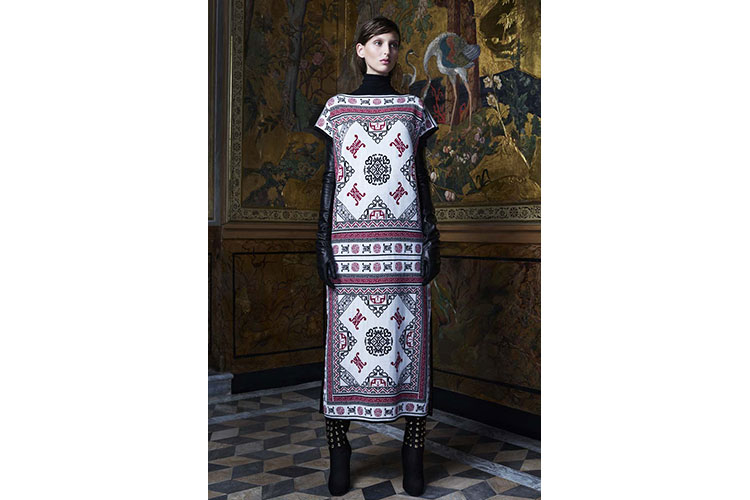 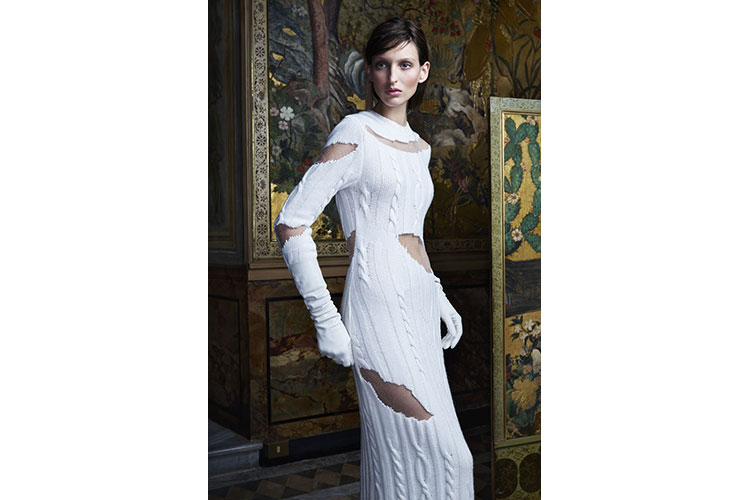 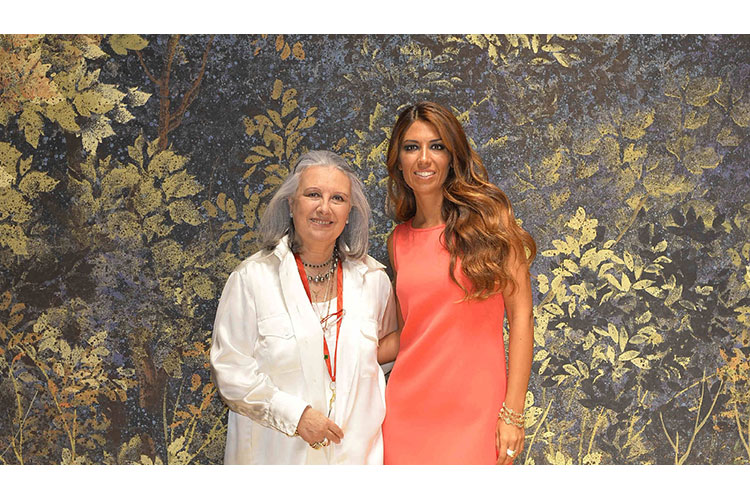 Un advertising dedicated to the China – Laura Biagiotti has been the first fashion designer to parade over there – in color, patterns, fabrics. An ode to a thousand-year old that has always influenced so much artist and also fashion designer like the great Laura Biagiotti. His mother started the adventure in the fashion world 50 anni fa.

On July 30, 1965, Biagiotti Group was established in Rome by Delia Soldaini Biagiotti, who opened a sartorial atelier at Via Salaria 126 that was hugely successful right from the start. In 1964, she obtained the contract for the design and production of the uniforms worn by Alitalia flight attendants, who were considered ambassadors of Italian style around the globe. Thus, a homemaker’s hobby quickly turned into a business.

A large American group on Seventh Avenue entrusted Delia with the production of a collection under the Via Veneto 7 label, which was exported and very popular throughout the United States. Delia’s daughter Laura, who was studying Christian Archeology at La Sapienza University in Rome, decided to join the company when it became too much for her mother to manage alone. Everything happened very quickly in the years of the boom of Italian fashion. Cities in Italy — from Turin to Florence, Rome and Capri — were appreciated and recognized as international capitals of fashion and elegance and became the destination of buyers from around the world.

On July 30, 1965, Laura and her new partners established “Biagiotti Export”, a new company for the production and distribution of the great names of Roman Haute Couture such as Schuberth, Capucci, Litrico, and Barocco.

The first “Laura Biagiotti” collection made its debut in 1972 at the Sala Bianca in Florence. Laura Biagiotti, together with a group of visionary entrepreneurs such as Ottavio Missoni, Walter Albini, Krizia and Gianfranco Ferrè, decided to transfer prêt-à-porter fashion from Florence to Milan, laying the bases for fashion “made in Italy”.

Laura became a friend and muse of French artist René Gruau who created several illustrations for her, including one of her image reproduced on iconic tote bags produced in the brand’s colors of reference – red, black and white.

Laura Biagiotti has been living and working in the Roman countryside since 1980. Laura transferred her headquarters to Castello Marco Simone, a national monument from the 11th century that she and her husband Gianni Cigna lovingly and patiently restored to its ancient splendor. The castle is also home of one of Europe’s most famous golf courses: the Marco Simone Golf & Country Club.

Laura Biagiotti is known worldwide for the extraordinary quality of her fashions. The New York Times called her “The Queen of Cashmere” due to her love for this precious yarn. Since her very first collection, Laura Biagiotti has taken a very different and more refined approach to cashmere, allowing it to evolve to reach another dimension in the fashion world.

An international ambassador of Italian fashion, Laura Biagiotti was a pioneer in her field and among the first to establish business and cultural relations with many foreign countries.

In 1982 Mrs. Gromyko, the wife of Russia’s Foreign Minister, was welcomed to Castello Marco Simone to see a Laura Biagiotti fashion show. The New York Times published a photo of the event on its first page with the title “East and West meet on the Laura Biagiotti catwalk”. This precursor to Perestroika occurred in 1982.

A unique event in the history of fashion occurred on April 25, 1988 in Beijing when30 Chinese models wore the most significant creations of Laura Biagiotti’s career, making Laura the first Italian designer to present a fashion show in China. Nearly one hundred and fifty outfits paid tribute to raw materials that had been produced in China for centuries: luxurious silk and fine cashmere.

The legendary doors of the Grand Theater of the Kremlin opened its doors to Laura on February 5, 1995. Laura Biagiotti was the first Italian designer to present a fashion show in the former venue of the USSR Communist Party in Moscow. The fashion show/event was an ideal bridge uniting Italian fashion and culture and the great Russian nation.

In 1995 Laura Biagiotti received the honorary title of Cavaliere del Lavoro from Italian President Oscar Luigi Scalfaro for her many years in the fashion industry and her great contribution in promoting Italian excellence and prestige around the globe.

Gianni Cigna, Laura’s husband and the group’s CEO, passed away prematurely in 1996. Their daughter Lavinia – the third generation – joined the family business and is now the Vice President of the group.

Between 2000 and 2008 Laura Biagiotti was the President of Comitato Leonardo, which united Italian excellence in industry, art and culture. She has been the Honorary President since 2009. In 2010, Italian President Giorgio Napolitano presented Laura Biagiotti with the Premio Leonardo for her exceptional contribution in promoting Italian fashion worldwide. It was the first time a woman had ever received this prestigious award.

“Biagiotti Day” was proclaimed in Rome in 2004 with special events dedicated to the brand and motivated by Laura’s great love of the Eternal City and her appreciation of its culture.

Laura Biagiotti has always been involved in promoting culture and being a patron of the arts. With her husband Gianni Cigna, she created the most important collection of paintings by Futurist artist Giacomo Balla. The collection, owned by Fondazione Biagiotti Cigna, appeared in an exhibition at the Pushkin Museum of Moscow in 1996 and at the Bramante Cloister in Rome in 1998.

In 1998 Laura Biagiotti Parfums restored the Cordoned Staircase of the Campidoglio, designed by Michelangelo and representing the heart of Rome, to its ancient splendor.

In 2003 Laura Biagiotti Parfums donated the new Grand Stage Curtain for the Fenice Opera House in Venice, after the original was destroyed by fire. The Stage Curtain is dedicated to Gianni Cigna.

The monumental “Genio Futurista” [Futurist Genius] tapestry by Maestro Giacomo Balla, a fundamental work of the artist, is on display in the Italian Pavilion of Expo 2015 in Milan.

Laura Biagiotti’s bond with art is also represented through her passion for theater and cinema. Laura, in fact, has been collaborating for years with the most important production houses for the production of costumes. In 2013 she collaborated on the film “The Great Beauty” by Paolo Sorrentino, which won the Oscar for the Best Foreign Film of 2014.

Laura and Lavinia Biagiotti were the first to create a synergy between fashion and sport aimed at strengthening two great sectors that help promote the prestige of Italian fashion worldwide.

In October 2000 for the striking finale of her fashion show, the champions of the Sydney 2000 Olympics took the runway wrapped in an Italian flag made of cashmere. The bond between Biagiotti fashion and great athletes has continued over the years with famous sports figures as testimonials for the brand.