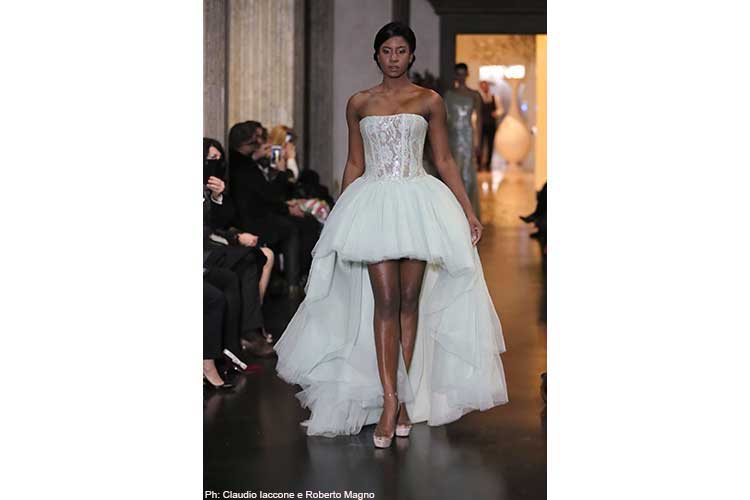 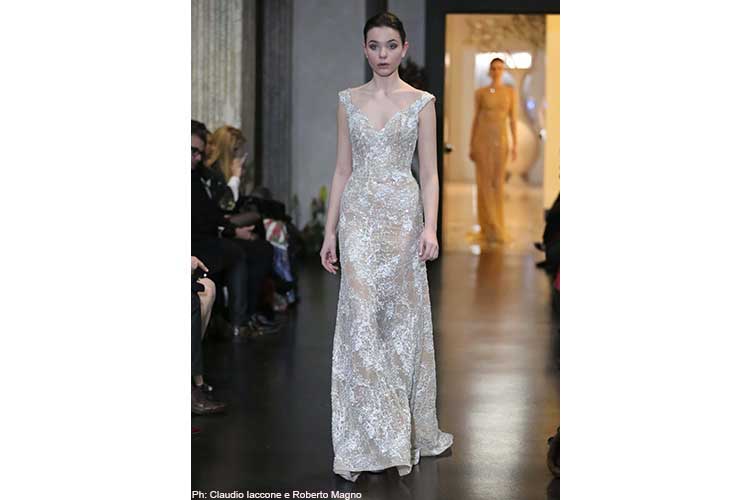 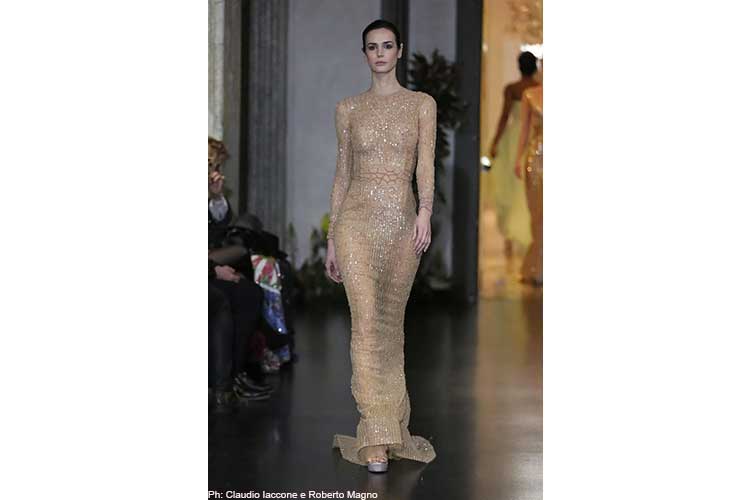 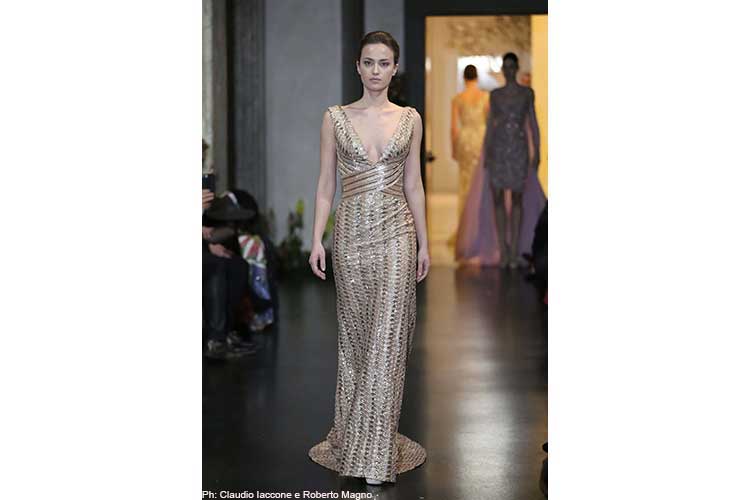 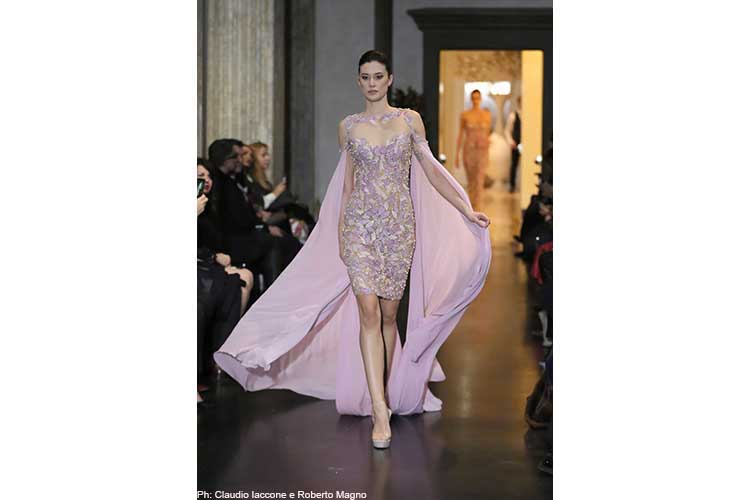 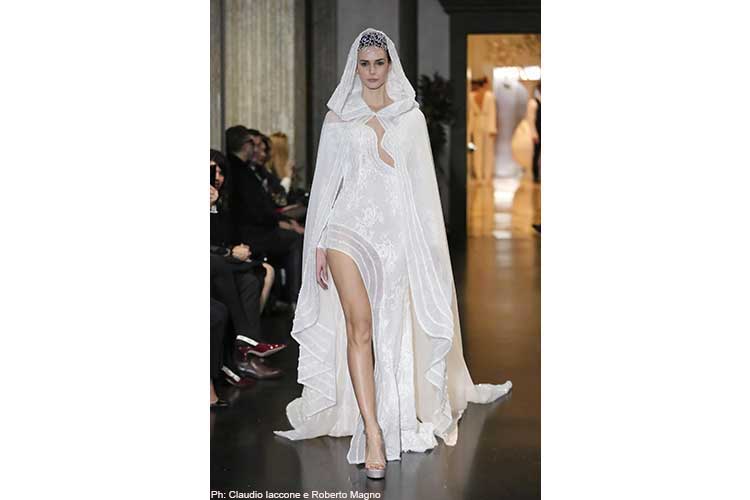 ABED MAHFOUZ an international name of Haute Couture chooses "Victoria" to return to the Roman catwalks and present the couture collection for the S/S 2018 entitled "CHAOTIC ROMANCE". Invited by the Institute of Italian-Lebanese culture whose mission is to increase relations between Italy and Lebanon. In the parterre, to applaud the return of the designer in the Roman capital, the Ambassador of Lebanon Ms. Mira Daher and the President of the Cultural Institute Maurice Salamé. Abed Mahfouz preserves Rome in the heart. Rome is the city that has seen him grow professionally since his first show in 2002 and was interrupted at present in Alta Roma until 2014. The Lebanese designer had never missed even one edition of the Roman Fashion Week, exhibited in unique and prestigious locations such as the square of the Villa Borghese museum and Via di San Gregorio in front of the Arch of Constantine with the great Colosseum as a backdrop. The "CHAOTIC ROMANCE" collection shows "colors" such as turquoise, pink, green, grey, black and white on the catwalk and describes the frenetic world of fashion combined with a romantic allure designed for a beautiful, powerful and elegant woman, proud to highlight her feminine charm. Abed Mahfouz reveals with this collection the exclusiveness of the glamor collected and brought together with art and power.

The "Victoria" event included in the Alta Roma Fashion Week calendar shows a woman on the catwalk aware of her charm and in love with life as Queen Victoria was. "A strong and courageous woman who has defied the rules of her time, a beloved woman who did not compromise". In the prestigious location of Palazzo Montemartini Palace Rome, four designers Abed Mahfouz, Cinzia Ferri, Marina Corazziari and Vanessa Villafane present their S/S 2018 collections through a traditional fashion show at the "Victoria" event - during the fashion week of Alta Roma - instead the new entry Debora Lo Magno exposes a tableau vivant.

In addition to fashion "Vcitoria" presents an installation of Floral Art, "The Victoria's way" created by the Floral designer GABRIELA GRANDI, by Copihue Floral Studio. Gabriela Grandi with her sophisticated and unconventional stylistic peculiarity has studied a mix between the late Victorian retro-chic design and the essential contemporary one, to interpret the movement and vision typical of Queen Victoria. There are three installations created by the Floral Designer Gabriela Grandi and exhibited in the Montemartini Palace Rome location during the "Victoria" event. The look of the models is cured in every detail by the team of Make-up Academy – Face Place by Pablo Gil Cagné and Gennaro Diana.At the end of the event, Carlo Dugo, Italian Ambassador of the Concours Mondial de Bruxelles Wine & Spirits, will be present with a selection from his wine cellars through the ENOSIS SRL Representative Agency.

The "Victoria" event contains everything that could be trendy, like a Gala dress or simply the cocktail one, also the bride, the sculpture jewels, the floral installations and the fine wines. Present the event the conductor Valeria Openheimer dressed by EMILIO RICCI, the designer who likes to define himself above all a passionate naturalist committed to producing garments with natural fabrics, pioneers in Italy and ambassador to the world of eco-fashion sustainable or respectful of both man and the environment.