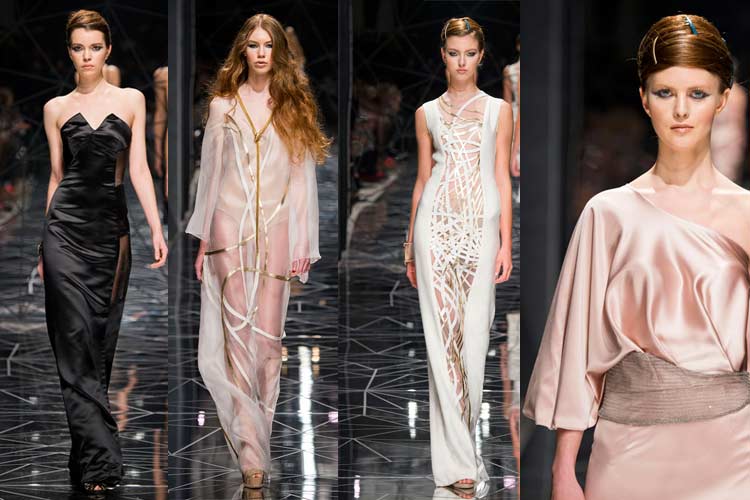 The new SS16 Haute Couture collection of Sabrina Persechino, titled ‘Arachne’ a reference to the Greek myth of a young seamstress that challenges the Goddess of weaving. Persechino is known for her architectural approach to fashion (the courtier is a trained architect), she assembles, constructs and creates modern and avant-garde forms and silhouettes.

Inspired by the works of architect Eric Owen Moss, which appear to be casually interconnected like cobwebs, Sabrina Persechino created a line composed of casual cuts and symmetric lines which call to mind the sides and angles of a frame.

The linearity and simple geometry is rooted in the myth of Aranche, the seamstress who was transformed into a spider by Athena (the Greek goddess of the arts). The presence of the peplum, a Greek fashion element, is in keeping with the source of inspiration.

Persechino uses touches of golds and lunar shades, to create an ephemeral effect like that of dew on cobwebs or settled moss on building facades. The defining elements of the collection are the use of leather and metal strips on white surfaces, simple structures and cuts, strong lines (wide necklines, defined bustier) a resistance to transparency, contrasting blacks. As for fabrics, the courtier chose cut silk, cady, sheer crepon and satin. The color pallet of powder pink, white and black, cobalt and gray pearl, was similarly influenced by architecture.