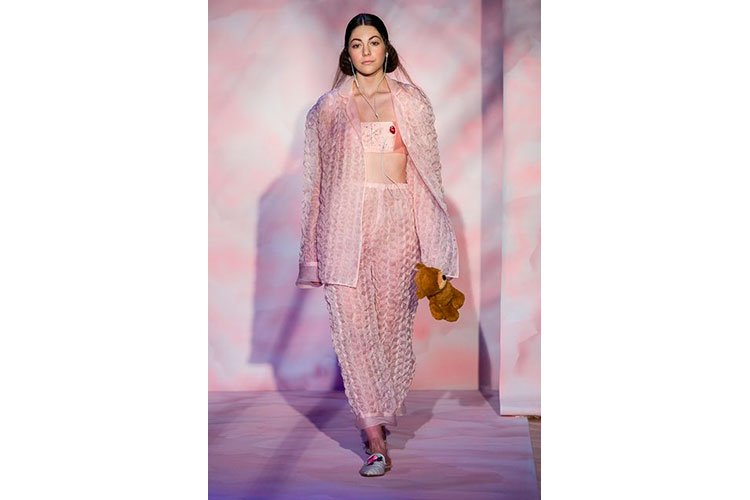 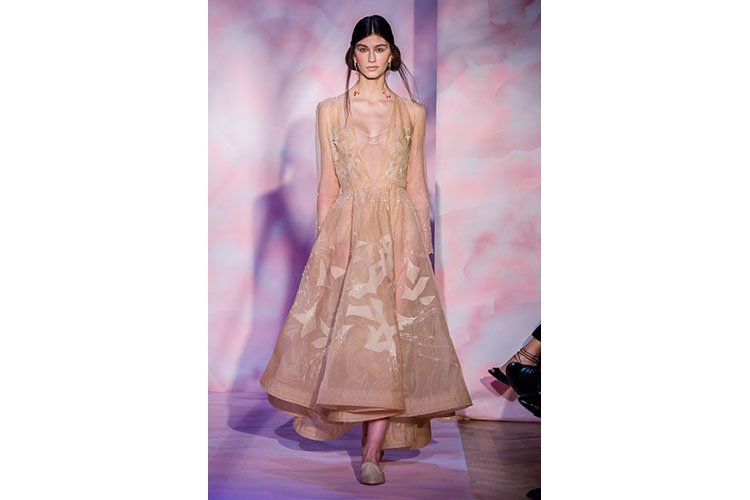 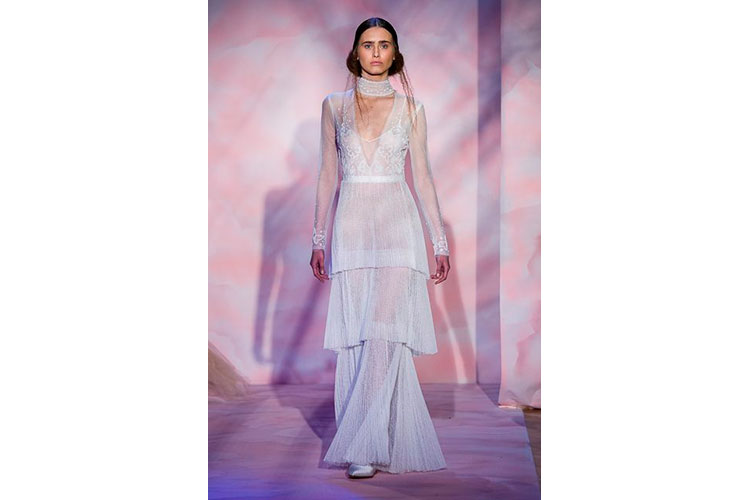 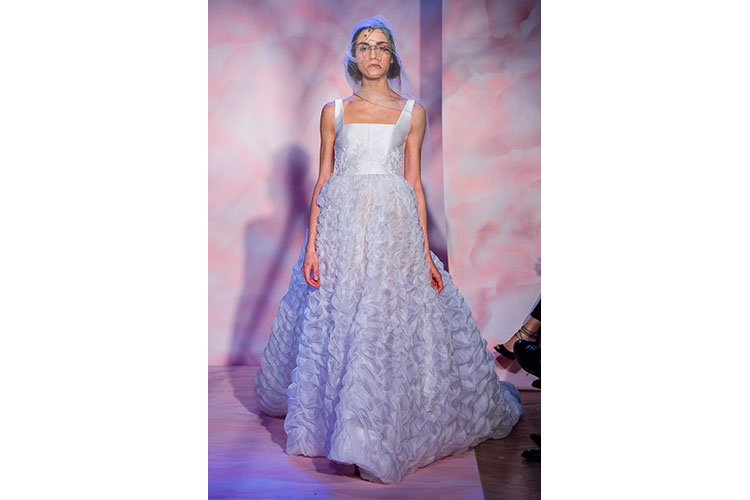 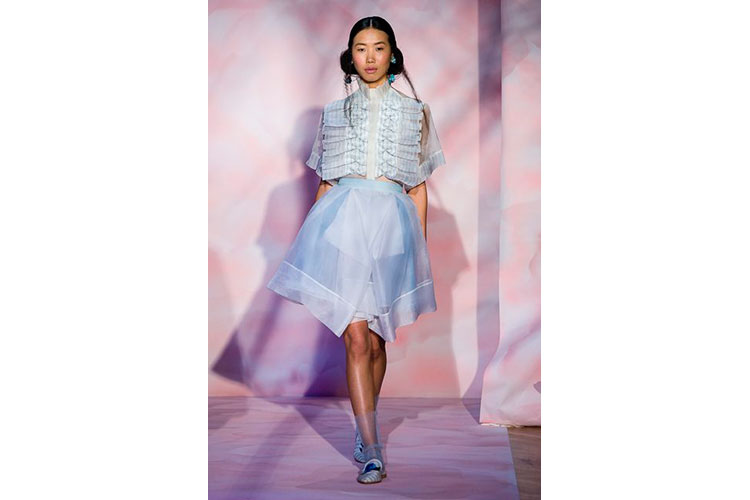 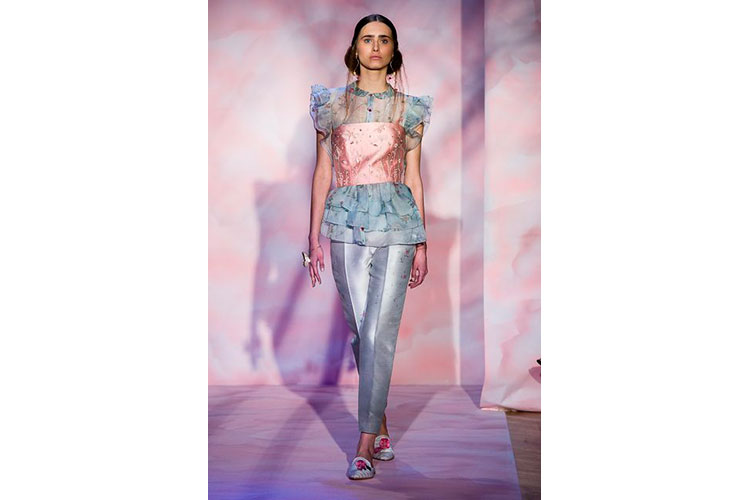 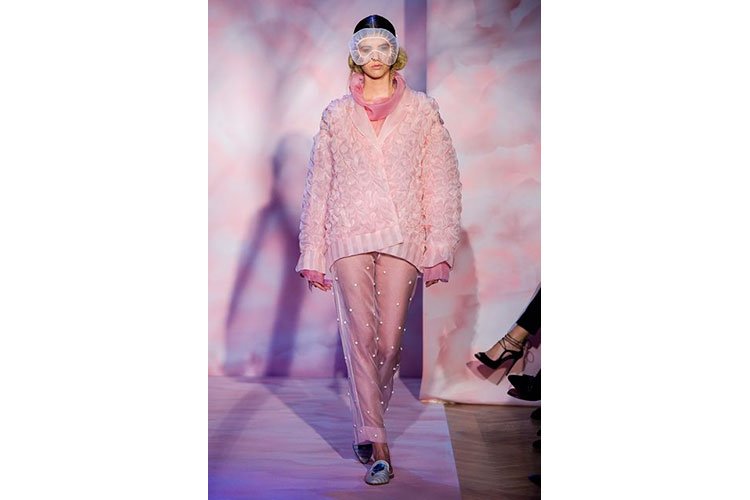 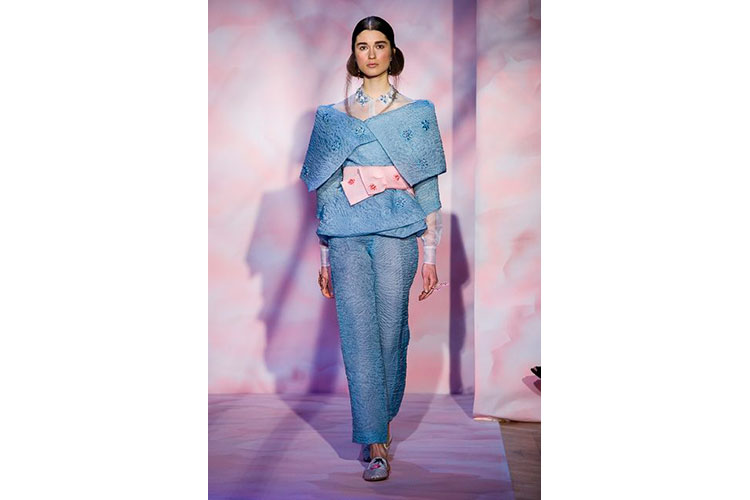 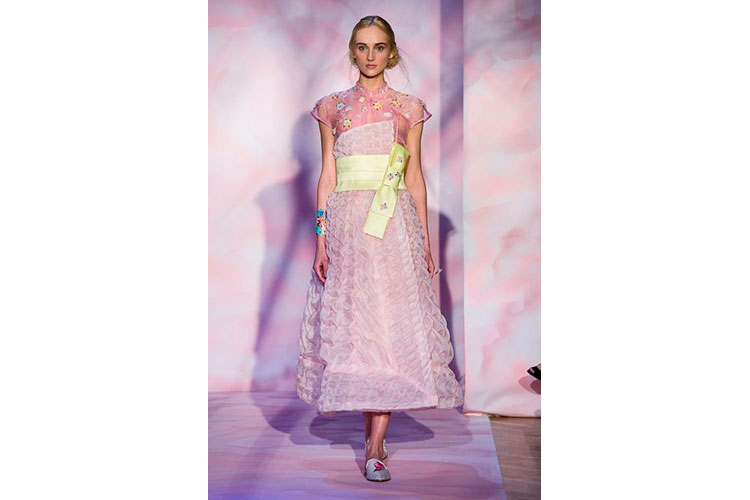 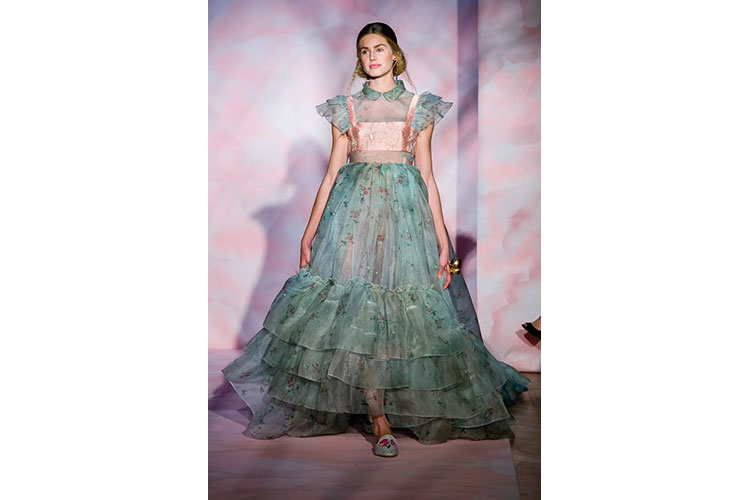 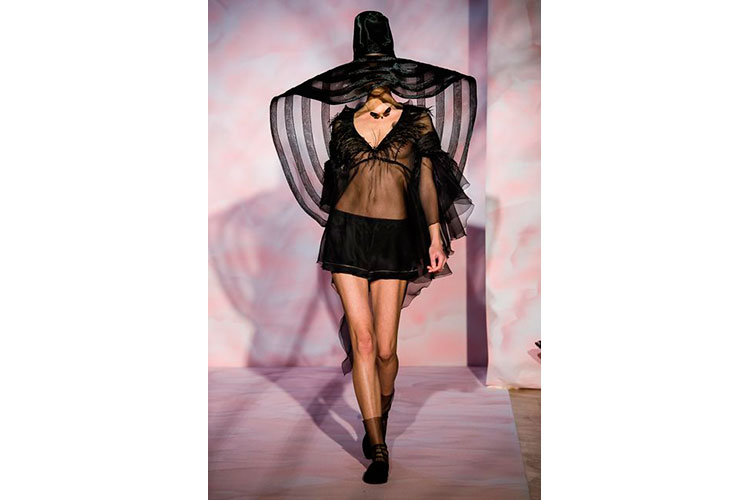 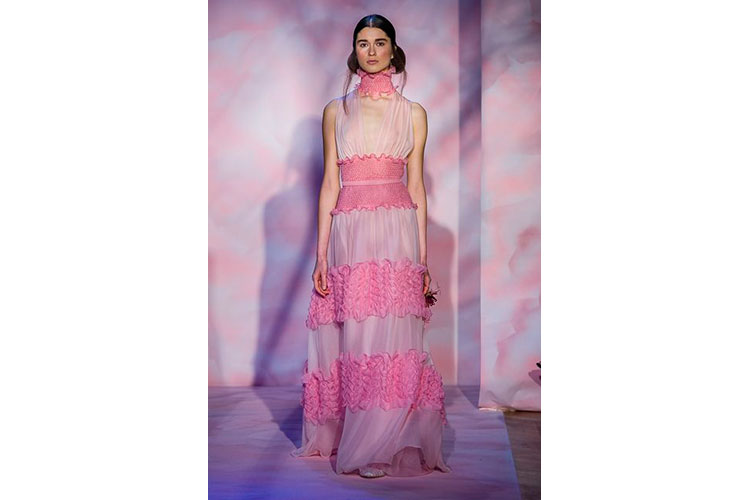 Half angel, half devil, she inhabits imaginary, dream-like woods, experienced in a dimension that transcends real life.  Her life is all about dreaming. She is the young inhabitant of the Gattinoni world, a fearless, unrestrained adolescent, she lives with carefree verve, sacrilegious exuberance. Her key weapon are dreams. A stark contrast of severe, voluminous and soft lines. Braids, crosses and triangles take shape in embroidery and in working techniques, like sacred reminders of knowledge that has been lost and then rediscovered.    For the forthcoming spring/summer season, Guillermo Mariotto, creative director of maison Gattinoni,  re-imagines Shakespeare’s “A Midsummer Night’s Dream”, in  a phantasmagorical contemporary garden. A coloured Eden, where haute couture merges with reality, the dream-like kingdom of young adolescents.“My woman mysteriously reverts to adolescence - explains Mariotto - She experiences a reincarnation and a new youth. A more liberated, carefree existence like contemporary couture which relinquishes heels but not the typical rituals of haute couture. Sartorial hyperbole”.Dresses, at times surreal, are inspired by a physical, transcendent sleepy, dream-like state. Like a painting by Pablo Picasso, in this dream-like world, faces are distorted with embroidered veils that transform and fragment the face. Mariotto transforms classic striped pyjamas into silk organza haute couture masterpieces featuring four thousand eight hundred matelassé smock stitches. Gattinoni’s designer draws inspiration from clouds, reproducing their fluffiness and volume with haute couture techniques, creating warps and wefts, based on a sophisticated research of the ancient techniques of smocking, especially those used in Italy, Britain and North America. Over-sized organza shirts, featuring matelassè - effect dickeys borrowed from the male wardrobe  are paired with skirts featuring severe pleats joined by small, origami-inspired fabric bows. “My aim, when designing this collection was to play with colours - explainsMariotto - All the nuances of pink, powder blue, sage green, pearl grey, raspberry, white and black. Comforting, reassuring shades that enfold, cover, drape and embody my fantasies”. Like a painting by Pierre Auguste Renoir. Hence the appearance of flights of brightly-coloured butterflies and dragonflies on maxi T-shirts that become mini-dresses. Hand-painted charmeuse kaftans describe a terrestrial paradise filled with roses, jasmine and poppies, almost a regenerated form nature. Dresses resembling dressing gowns in powder blue, illuminated with crystals and mother-of-pearl, plays of applications, details and pleats. Silk tulle and silky organza are the materials chosen for long dresses that tell the story of the constellations, a blaze of tiny, star-shaped transparent crystals. Large intricately worked collars caress the faces of young women in an atmosphere reminiscent of an eternal toy land, where time is marked by the chiming of musical boxes. However, dreams are not always about fairytales. Hence, the clouds of light tulle begin to darken, like the small leather jacket embellished with cock, ostrich and partridge feathers worn over culottes, a tribute to pop star Beyoncé, a contemporary goddess who is a fan of the Gattinoni look.

Just like a Sabbah, the dream becomes a nightmare and then again a dream with exquisite black dresses featuring the maison’s distinctive couture traits. A second incarnation à la Guillermo Mariotto. The couture nightmare features exquisite raffia embroidery and micro black boule and, accompanied by the notes ofMarilyn Mansonand the Goblins, it bursts onto the catwalk of the former 16th century dwelling of Pope St. Pius V, currently home to the prestigious Link Campus University. The dream returns, the adolescent wakes up in Eden under the sculpture tree by artist Guido Borghi. She is now a bride wearing a white dress with pleated flounces created using priceless Japanese gauze and flowered embroidery. At times, she prefers a chaste, almost monastic shirt. And, at the height of the moment, she does not reject the majesty of smocking that gently evolves from micro to maxi on the wide skirt, starting from the bodice of the embroidered Mikado.  The partnership between maison Gattinoni and goldsmith Gianni de Benedittis, the designer of the futuroRemoto brand continues. To mark the occasion, the brand has created gold bracelets featuring slender dragonflies, delicate branches interwoven with small flowers and insects and silver butterfly rings, exclusively for the maison. The young adolescents inhabiting Gattinoni’s Eden favour gold ear buds, to listen to themselves during the day and to their hearts at night. Sheer magical enchantment!