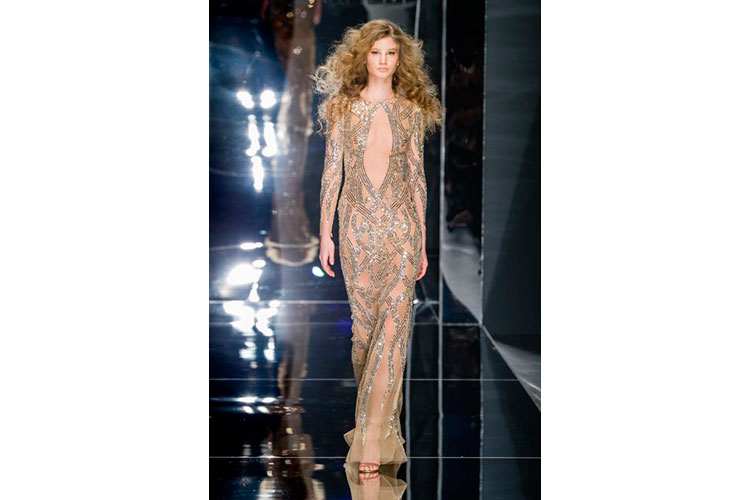 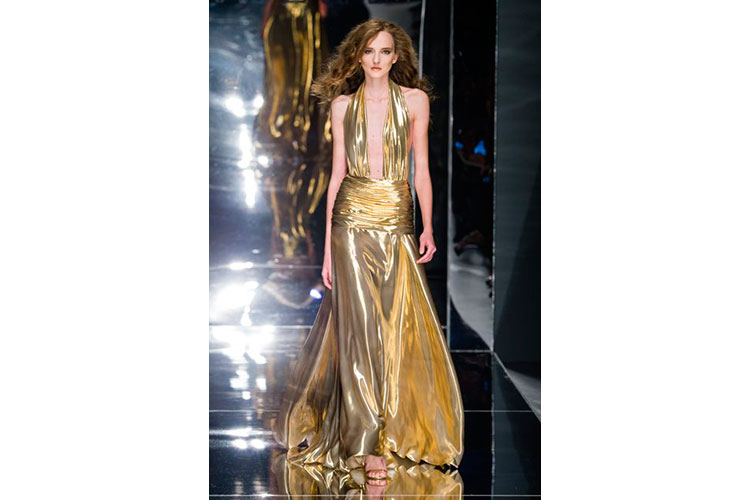 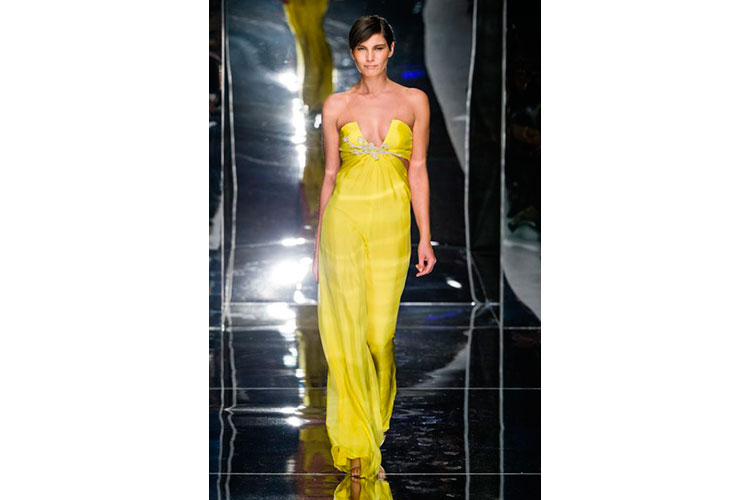 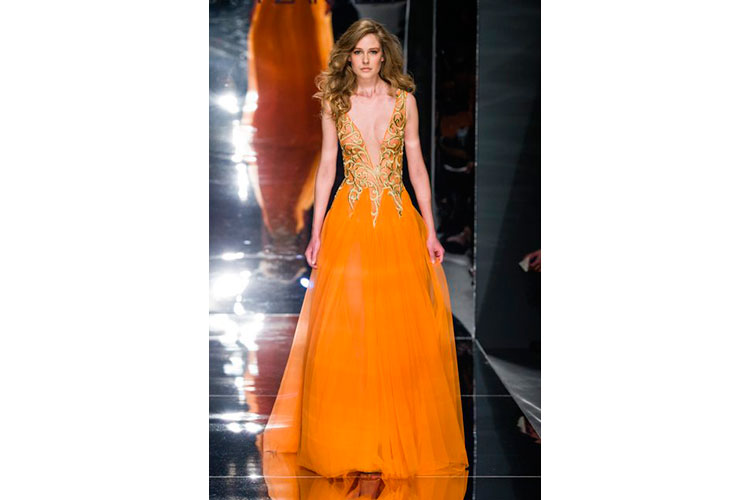 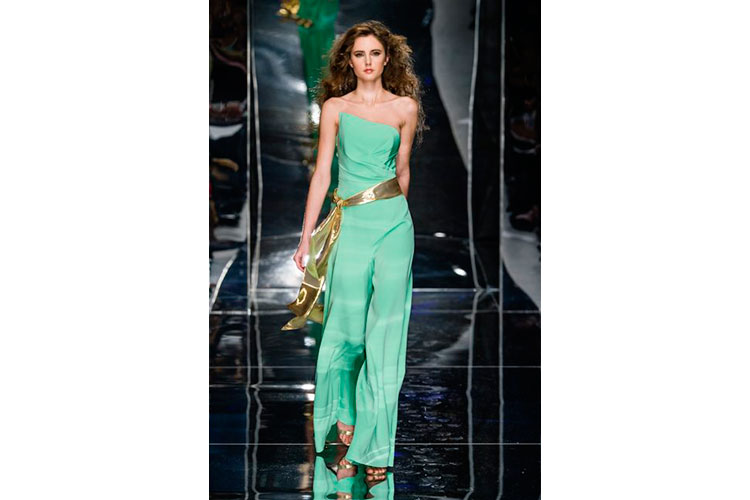 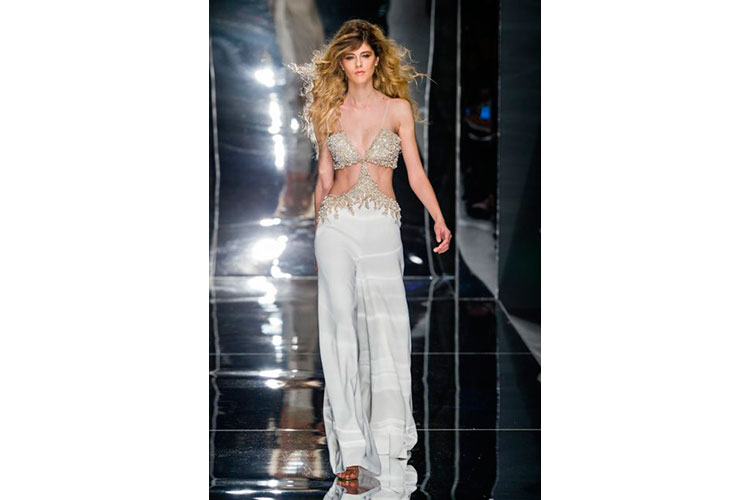 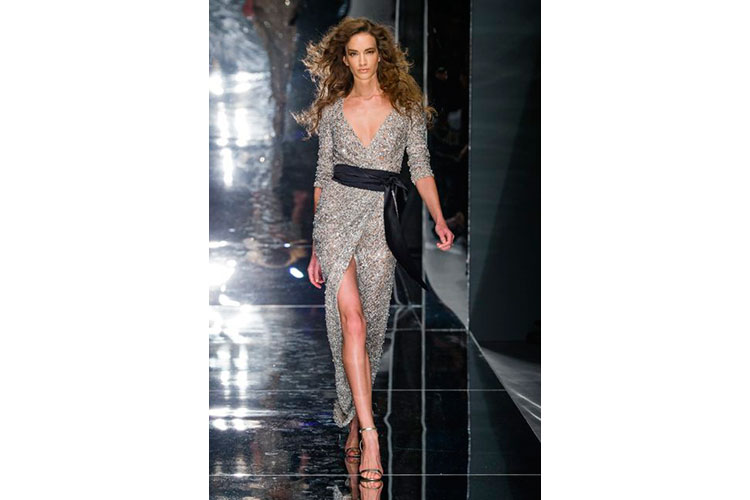 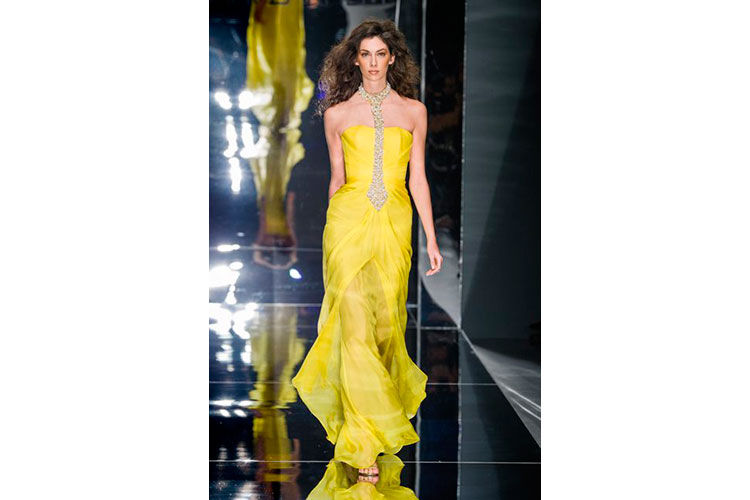 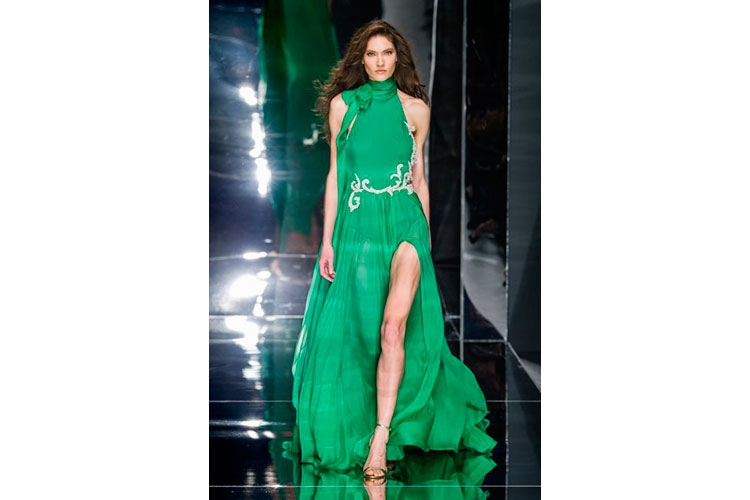 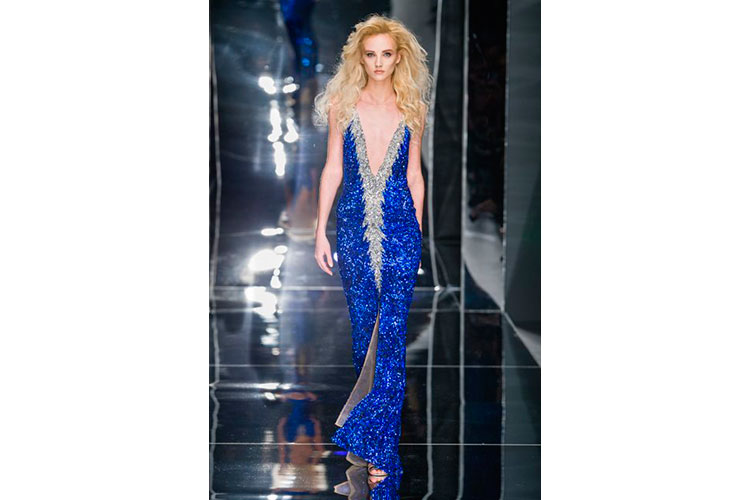 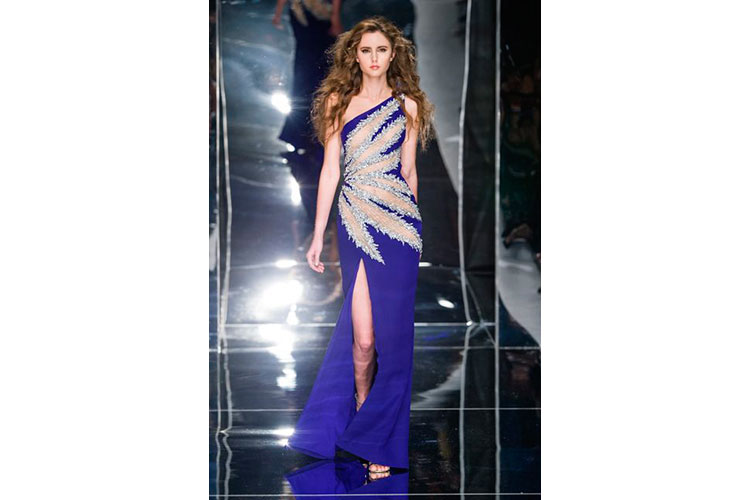 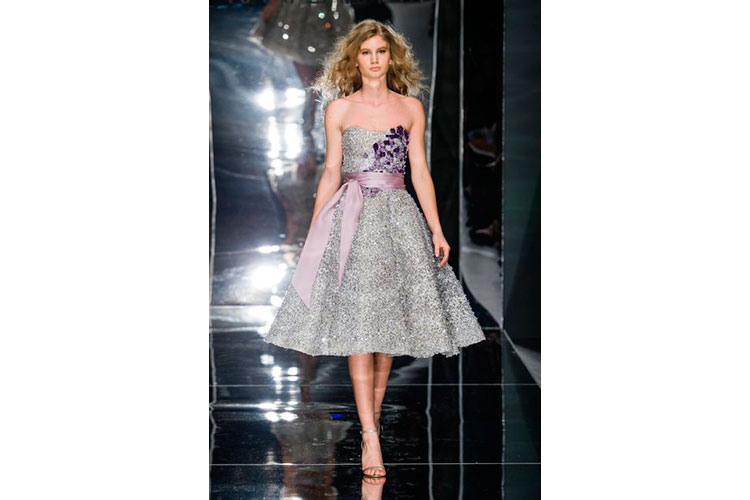 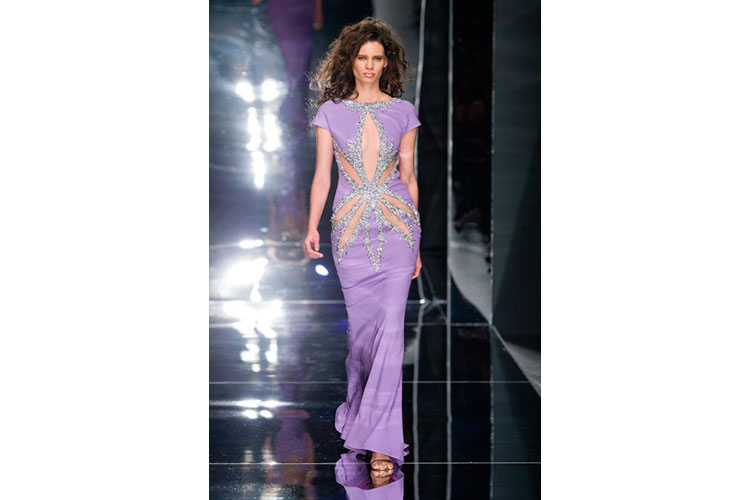 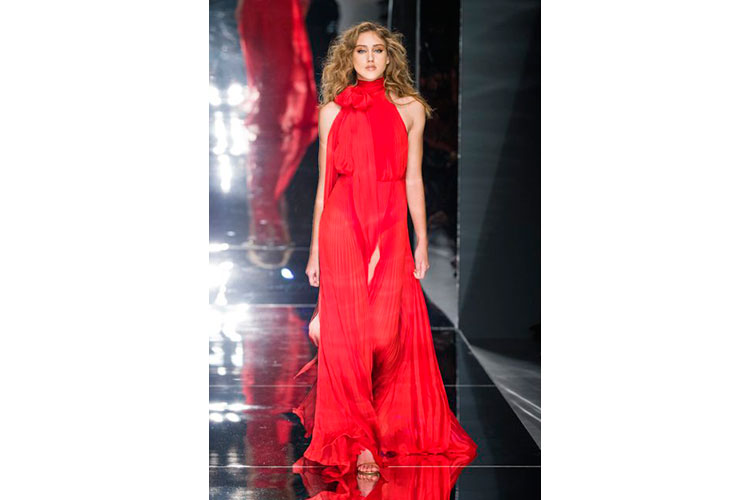 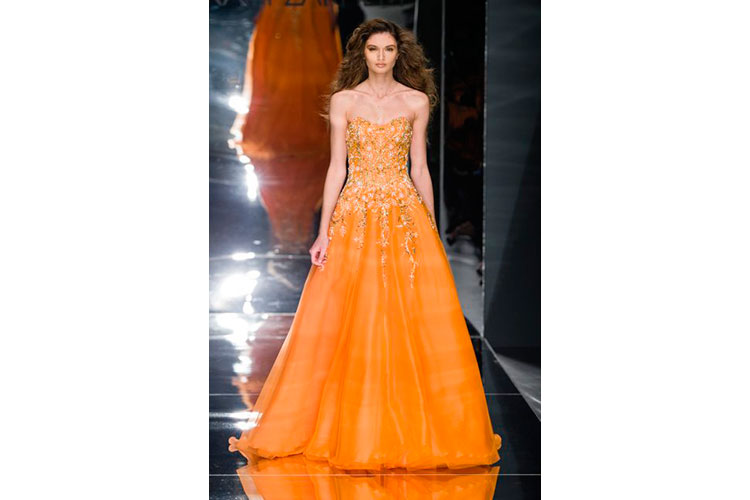 Roulette, paillettes, vedettes, the luxurious aura of the 70s and 80s pivots around this trilogy. At the heart,  Dalida, Bianca Jagger, Studio 54 mingle, it’s the disco fever! From this ephemeral moment remain only the images, the music, the echo of laughter, madness, tenderness, extravagant elegance; a little golden dust encapsulated in memories. The thirtieth anniversary of the disappearance of Dalida awoke in Rani Zakhem the desire to recreate this universe in his own way. Through the spring summer 2017 collection , the designer imagines a sumptuous wardrobe where Dalida and Bianca Jagger, transatlantic twins of this exalted Era, would lend each other their sparkling outfits to party at Studio 54. As a starting point stage costumes of the Italo-Egyptian singer who conquered the world, inspire the couturier who gives them life by interpreting them in evening dresses, in Dalida’s rich and ethereal style where other festive epochs are jostling, notably the Roaring Twenties In the embroidery patterns. In a cascading color palette declining on silk chiffon, shades of lilac, yellow, tender green, green anise, pink, blue, carmine and saturated red, without neglecting black,  bright white and gold, the codes of the 70’s , Palazzo wide legged pants, high collars, flowy scarves , bustiers and plunging necklines, play a note of novelty. Irresistible fluid jumpsuits, of different cuts and colors, embroidered with floral motifs in sequins and crystals glide down the runway. If the wrap dresses with their comfort and simplicity  are a reminder of these times when femininity was inseparable from a new idea of freedom, at Rani Zakhem they play the paradox with sumptuous embroideries. Graceful flowing hostess dresses, true pillars of elegant Seventies wardrobes, with asymmetrical necklines and a medieval sleeve entirely embroidered, inside out adorn this collection. Making place for grand evenings, directly inspired by the scenic universe of Dalida’s  flamboyant creations, in particular a gilded silk lurex dress, all in pharaonic sun pleats converging at the front towards a precious central motif, and forming in the back an impeccable set of herringbones. In motion, fabric turns into liquid gold and reflects light over its entire surface. The couturier deploys an illusionist’s skills, mastering fabric as a theme per se. The alternation of gloss and mat on a sheath entirely hand embroidered with striking paillettes imitates velvet, devoured by a silvery pattern of cold flames that seem to dig into a vertiginous décolleté. Everywhere, sequins, rhinestones, pearls, chiseled briolette crystals recall the faceted balls of the disco years and sparkle infinitely on creations flirting with surrealism. Far from nostalgia, Rani Zakhem picks up the party favors of celebrations past, magically making way through his art for new beginnings . Music!