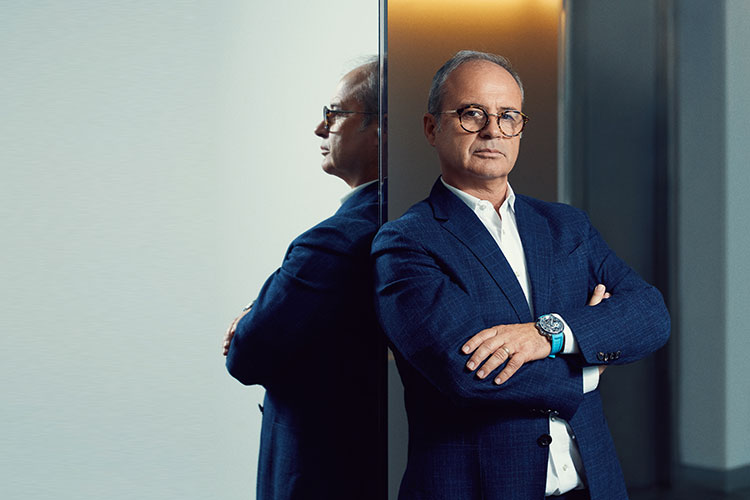 Designed in partnership with Luis Campos – the distinguished and renowned football scout and one of the best technical directors in world football – the U52 breaks with its underwater vocation to appeal to fans of the beautiful game.This collaboration with the sporting mastermind features a number of technical, graphical and personal details. Based on a fundamental model from its collection, Angelus presents a limited-series watch released in just 25 copies: a powerful yet lightweight skeleton tourbillon steeped in turquoise.

This means that the U52 is able to reach depths of 300 metres unscathed and features a 60-minute timing system. Instead of occupying the bezel, the system is situated inside the case on the flange divided into five-minute intervals. This unidirectional rotating ring is operated using the crown at 2 o’clock. One of the U52’s specific features is that the markings from zero (the Angelus logo) to 45 are in a different shade of blue. Their distinct colour means they can be used to time each half of a football match. Another characteristic that makes this edition so special is the small seconds which, instead of being indicated by a hand, is mounted on a disc painted with a Super-LumiNova football.
Lastly, Luis Campos chose to adorn the tips of the hands, the small-seconds pointer, and the sculpted rubber strap in the same shade of turquoise as the flange.

The 45 mm-diameter grade-5 titanium case houses the Angelus calibre A-300, a skeleton movement with a one-minute flying tourbillon. Paradoxically, its ultralight, graphic structure helps to shield it against vibrations and impacts. It was this aspect, in particular, that caught Luis Campos’ attention because he wanted ‘an extraordinary sports watch for very demanding users, like himself’. The counter-intuitive relationship between lightness and solidity resonated with the manager, who loves nothing more than breaking the mould.

Luis Campos was born in a small harbour town in the north of Portugal. Today, he is sporting advisor to Gérard Lopez, owner and president of LOSC football club in Lille, France. He has worked in football for over 30 years, managing several Portuguese clubs before proving himself as an excellent professional scout. Assisting a number of major European title-winning clubs, with many success stories at Real Madrid in particular, Luis Campos has established a system for spotting young talents thanks to his constant pitch-side presence, his vision and his experience. From 2013 to 2017, he shone as technical director of AS Monaco, where he won renown for his daring and lucrative transfer strategy and for discovering now-famous players including Anthony Martial, Bernardo Silva, Bakayoko, Fabinho and Mendy, as well as for his part in a certain Kylian Mbappé’s professional début at a time when only Campos believed in him. At Lille, the anti-conformist mastermind continues to work closely with players such as Osimhen, Pépé, Gabriel, Ikoné and others.
Luis Campos is not an ambassador – he is a friend of Angelus, who harbours a particular appreciation for the brand’s creations. Angelus developed this limited-edition U52 in close collaboration with him. In particular, Luis Campos chose the blues that adorn the watch and its strap, and selected the football motif for the small seconds. He also determined the technical specifications for the piece, which is directly descended from the U50 diving watch and its A-300 flying tourbillon skeleton calibre.