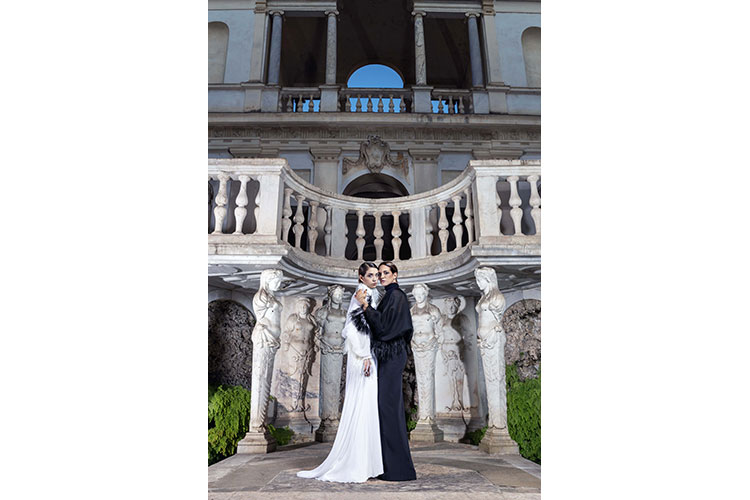 The myth  of Electra  as a symbol  of the relationship between  mother  and daughter pervades the new Couture  Autumn  Winter 2020/21 collection by Antonio Grimaldi which will be unveiled  through a fashion  film  - interpreted and directed  by Asia Argento  - and a photo  shoot  set  in  Rome  on Monday 6 July at 18.00 on the digital platform Fédération de la Haute Couture et de la Mode, and on the IGTV Instagram channel of the Maison.

Different expressive ways  to  make  up  for  the  impossibility  of  organizing  a  traditional fashion show due to the Covid-19 emergency and which led to the presentation of the new collection in a short  movie  with  theatrical tones directed  by Asia Argento  and interpreted by her together  with her daughter  Anna-Lou  Castoldi  - protagonists on the scene of the most ferocious matricide of Greek mythology. A noir  and glamourous film that tells  the profound story  of two symmetrically related  but rival  women, dressed in Antonio Grimaldi.

Inspired by Rome and fascinated by the myth of Electra, Antonio Grimaldi  designs  and creates a collection focused on the mother and daughter relationship: a collection of contrasting  dresses,   of  rivalry   between   whites   and blacks and, therefore, the contrast between good and evil, light and darkness.
A psychological investigation that  goes  deep and that is revealed not only in the film  but also in the collection immortalized in the splendid nymphaeum of the National Etruscan Museum of Villa Giulia in Rome.

Twenty-two dresses  (of which  three  are for  children) between  absolute  white  and purest  black,  interspersed with  a thousand shades  of  pink:  from the most pale, to blush pink, from pastel pink to magenta, light and dark.
The white  dresses  are embellished with  embroideries in anthracite gray with a dark spirit, in 3D, with small metal studs, stained with interweavings of crystal and platinum jais floating on the body, as do the metal chains.
Even the pink dresses  are contaminated with anthracite gray embroidery, with glass and silver  crystals. While the black  dresses  present  very  dark  leather  embroidery blocked by crystal jais and micro ribbons, also in leather, in relief, with a tricot effect.

Together a triumph of feathers:  in macro version, lacquered, painted, sprayed and laser worked, ton-sur-ton and never in contrast, to enhance the sculptural volume of the clothes. Those  same  sculptural lines, which are asymmetrical  and in movement, are interrupted by important openings. In this way the mini dress with voluminous trains alternate with two pieces incorporated together becoming a single dress.
The trompe  l'oeil  effect  returns: clothes that deceive the eye through a game of cuts, volumes  and overlaps  and pretend to parade as capes and robe manteau.
Heavy fabrics such as the duchess alternating with gazar mix with cady crepe, taffeta together with impalpable organza and chiffon.
To complete the look, the jewels created ad hoc by Marco De Luca, a Roman craftsman designer, embellish the clothes with  bracelets  and  rings  depicting dragon  heads,  a symbol of creative and beneficial strength.