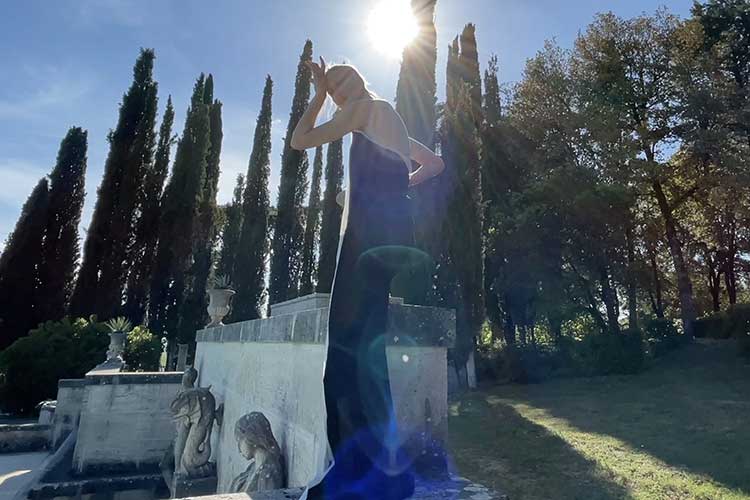 “Earth, 114 million years ago, one morning just after sunrise: The first flower ever to appear on the planet opens up to receive the rays of the sun. Much later, those delicate and fragrant beings we call ‘flowers’ would come to play an essential part in the evolution of consciousness of another species.”

Aelis delivers her eco-conscious reflection by embodying the beauty of the plant world. To suggest a harmonious and respectful vision of the planet, she adopts the point of view of a blade of grass, stem of chlorophyll, symbol of life and “renaissance”, which green colour inspired the entire collection.
The green ocean of the Tuscan hills surrounding Sofia’s house, retains traces of ancient cultures, such as the Etruscans’, which also nourished the collection. The myth of Catha, the goddess daughter of the sun, and the freedom and refinement of Etruscan women who lived in harmony with nature, inspire and crystallize the very essence of Aelis.

During a stormy afternoon spent in the company of Jacopo Godani, who directs the film serving as the collection’s virtual show, the idea of shooting in Tuscany came naturally while observing the sea of chlorophyll that lay before them.
Jacopo thus films the beauty of the performers’ gesture, who walk nature’s catwalk like models from the plant world, slowly emerging from the ocean of chlorophyll.

By guiding the artists-dancers through the fields, as the wind makes the grass dance, Godani captures their interaction with nature and invites them to replicate the movement of a blade of grass, both limited by its own roots and carried by the energy of the wind.
The organic silk chiffon dresses are so delicate and light that the wild grass wears them and becomes a dancer itself. The chlorophyll blends into the fabric, reinforcing the mimicry between garment and nature. A sleeveless dress with a train, made of silk taffeta, evokes the colours of the forest.

The sun offers an extremely rare sight during filming: a sun halo, omen for the Etruscans, opens up a reflection on the rarity and uniqueness of each moment, but also on the garment as a work of art.
Aelis works hand-in-hand with Australian Michael Taylor, who gifted one of the most precious, and absolutely ecological, merino wools in the world. Sofia pays homage to him by transforming this wool, a true gem of nature, into a necklace dress adorned with unique crystals.
Each step of creation at Aelis is guided by an artistic gesture and a quest for beauty, making it possible to transform the world, in the hope for a global ecological awareness.
Before the emergence of art, Tolle underlines the key role that flowers have played in the evolution of human consciousness, through their beauty and lack of utilitarian value: they are thus, for humans, the expression in form of that which is most high, most sacred, messengers from another realm, like a bridge between the world of physical forms and the formless.

Aelis wants to make a flower bloom in every woman.