”Both of us knowing”, Courrèges SS 2022 Collection 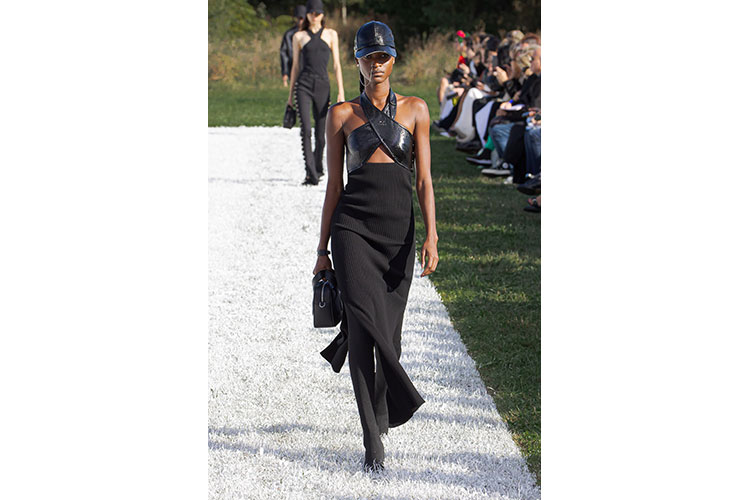 After  the  club «La Station» in Aubervilliers last  March, the  monumental Courrèges white square lands this  Wednesday, September 29,  2021  in a new  party place: the  Bois de Vincennes in Paris.  A park  on the  edge of the  city  where many free parties have taken place in recent years. The square, stripped of its walls, is here soberly signified on the  ground with paint*, taking nature as a decor.

At the origin of this collection, and for this second show, a memory: it is in this clearing that Nicolas Di Felice and his friend Erwan  Sene - with  whom he  composed the  soundtrack of the  show - danced all night long a few summers ago. A moment of grace that inaugurated many others: notably the   reunion with  his  boyfriend after the   lockdown, when the   Bois de Vincennes  was  one of  the   only  places where youth could still  party together.  «Both of  us  knowing», by  invoking these  times of  friendship dear  to  Nicolas Di  Felice,  pays homage to these moments of intimacy that, sometimes, crowds experience in unison. A way for Courrèges to show its desire to be one with its public.

These memories of jubilation have fed a collection designed around the  festival wear. In line with  what was  initiated by Nicolas Di Felice, the  archetypes of the  counterculture are mixed here subtly to  the  vocabulary of Courrèges - all with  an  atelier know-how. Thus,  the capes start with  an extremely simple and geometric pattern (inspired by a round cape from

1968, a triangular one from  1969 and a square one from  1995) with  a cutting detail to  build the  shoulder. The proportions have been exaggerated to completely cover the  body - or for cuddling together underneath. Parkas and bombers come into  dialogue with  heritage coats and trapeze skirts.

The «Loop»  theme - crisscrossing yokes of fabric found on bras, dresses, skirts, baggy pants and even on  the  handles of this  season’s «Loop»  bag - was  inspired by the  straps of a 1976 Courrèges dress (the  first piece in Nicolas Di Felice’s personal collection, acquired years earlier). Fabrics and prints continue to reinvent heritage, like this trompe-l’oeil ribbed knit made from  strips of mirrored vegetal vinyl or these diagonal stripes taken from a 1968 chevron stripe.

Silver,  azure blue, pink  (André Courrèges’ favorite color, a symbol of tenderness and optimism), pale yellow  and ochre: a palette that subtly suggests the  world of techno and punctuates a collection with an assumed minimalism. Like these «scarf» dresses in transparent pleated mesh, composed of  two  rectangles of  fabric and attached by  two triangles. Or the  last  three dresses, each made of a simple strip of fabric, like for  the  girls wrapped in a piece of vinyl for a 1963 fashion show and immortalized by Irving Penn.

«Both  of us knowing» claims a form  of purism at the  heart of Courrèges and dear to Nicolas Di Felice. To better revive the  feelings.