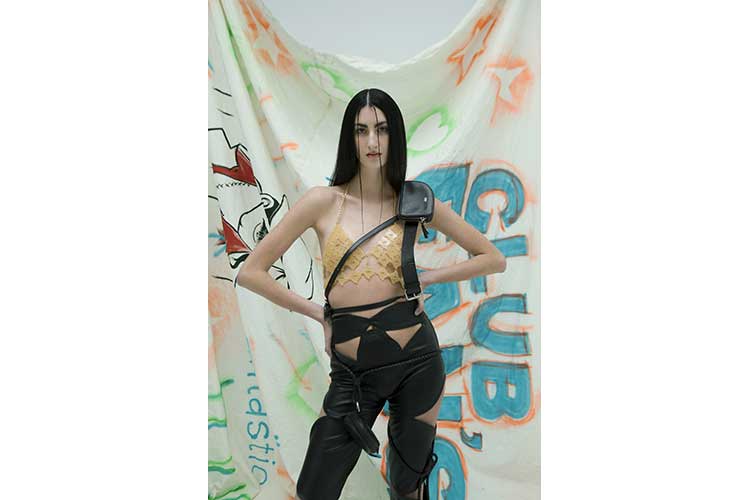 The creative universe of the brand puts in tension the antagonist Flemish and Argentinian heritage of its creator. The brand tries to highlight this south american heritage and materials in a kitsch and ironic way ﬁltered by Antwerp’s lens. Fluid materials are transformed by architectural cuts, a midpoint between conceptual anti-fashion's experimentation from Antwerp and Latin- American intuitive sensuality. This tension aims to deconstruct, rethink and give value  to their roots. They want to highlight and enrich the Argentine traditions, materials and typical garments of the gaucho and Pampean culture, but with a satirical spirit, not solemn or traditional, urban and youthful that comes from nothing less  than the academy of Antwerp. They believe that Argentina is much more  than a caricature of a gaucho and a horse,  they have  multiple layers of amazing and hybrid inﬂuences that go far back, from ancestral cultures to Italian and Spanish immigrant inﬂuences that make  their culture rich and hybrid.

In this logic their SS22 digital PFW presentation showcases a fashion ﬁlm directed by Macarena Rubio and produced by Poster. The short ﬁlm introduces an intimist family portrait, getting ready  for a delusional wedding taking place  in a typical ¨conventillo¨ from Buenos Aires. The narrative uses a kitsch, colorful and eclectic atmosphere, dear  to the argentinean immigrant urban life. The ﬁlm seeks to cast a light on their strong bloodline rituals, a picturesque and festive B-side that invites us to think about the importance of family ties in their culture, sometimes absurd, sometimes suffocating, undeniably  intense.

Their SS22 collection is called “Cumbiancheta”, referring to the cumbia of the 1990s. This retro tropical musical genre of pan-Latin American origins, had a trailblazing impact in our popular culture. Neon colours, decadence and opulence represent this golden era, infused by the economic fantasy that 1 peso was equal to 1 dollar, marked the aesthetics of our society in the period, transforming Gianni Versace’s Miami in the cultural epitome. While consumption was out of control,neoliberalism ruined internally the country: our factories were emptied and their artisanal savoir-faire were progressively lost, crisis was just around the corner. Oblivious, extremely tanned,blonde and in animal print lower middle classes now enjoyed eating Pizza with Champagne,and our president rode the streets on a red Ferrari and hung out with the Rolling Stones on tv.

The collection is inspired by the 90’s minimalism turned kitsch, uber-sexuality in the form of boob implants and the nostalgic period of 1920’s, when Parisians referred to Argentinians as “riche comme des Argentins”, an utopia once achieved that never came back.

The use of leather is central to this collection in counterpoint to the use of latex and vinyl materials. The leather was  worked in unconventional ways: macramé braided into accessories or pieces that are found  between clothing and leather goods. These accessories called "sadaels" (a play on words between society anonyme Daels  and  with the concept of saddle (SADDLE in English) are based on a reﬂection on female clothing and the absence, from construction, of the ability to wear without the need for an extra bag  or accessory.
In addition to leather, the novelties are presented in neoprene, cotton poplins and Italian silks. The color palette ranges from black, neons, red and white.