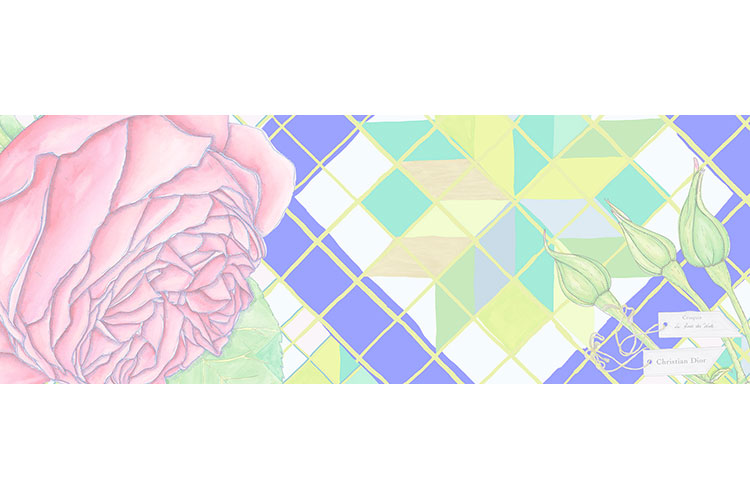 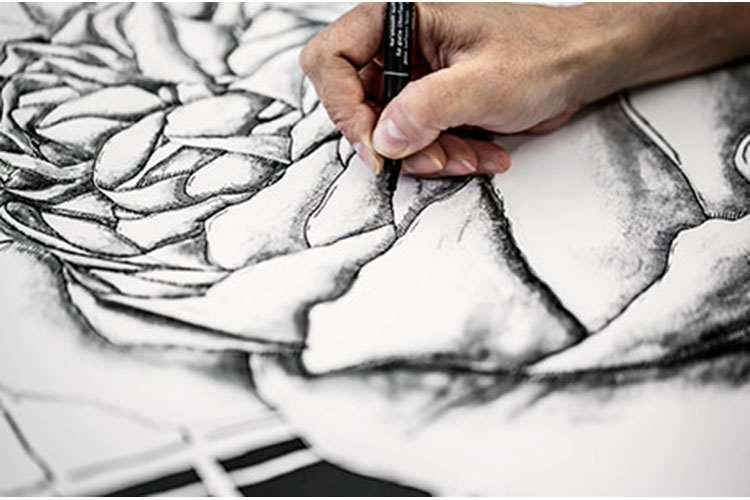 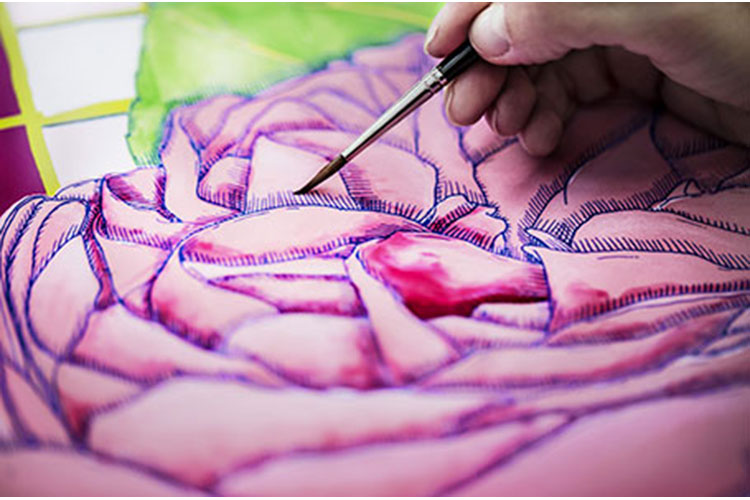 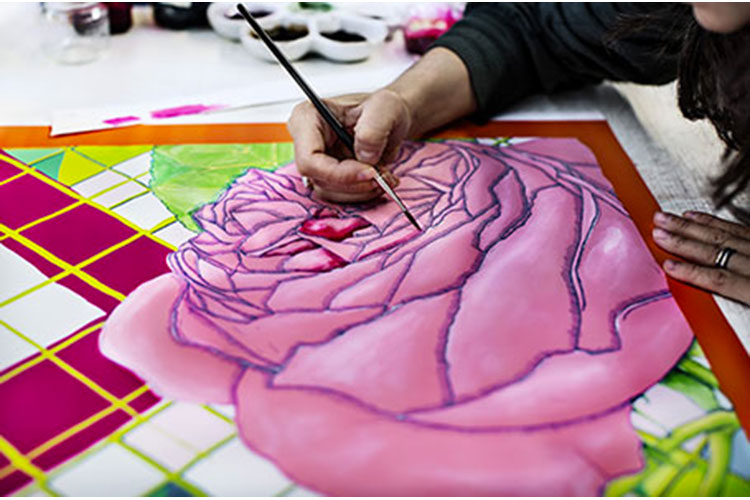 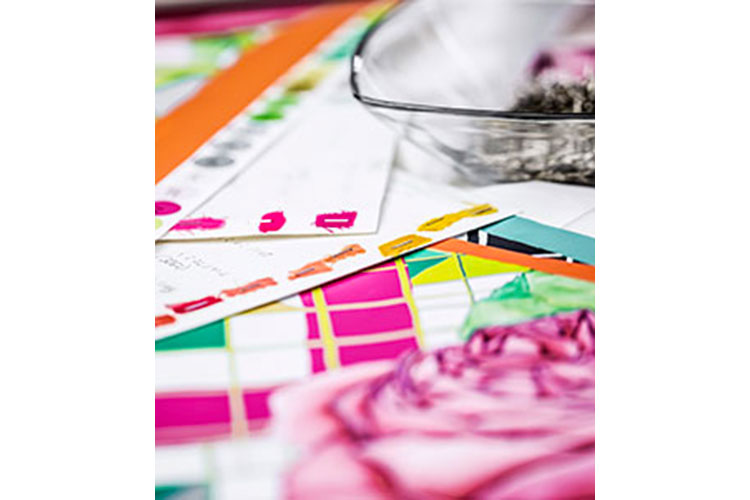 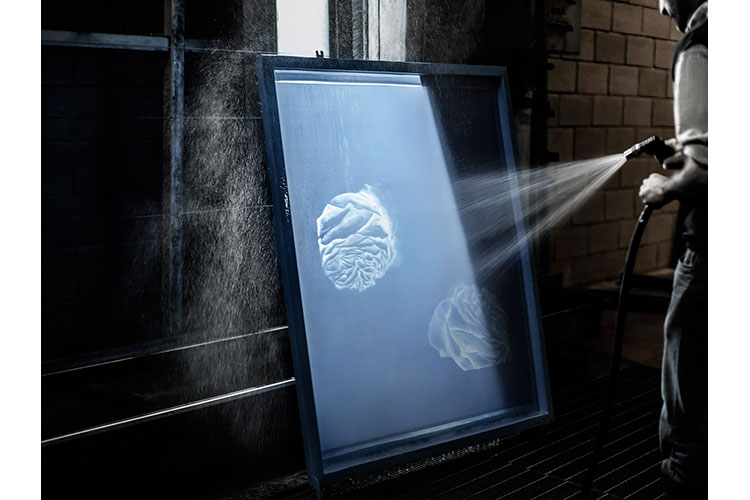 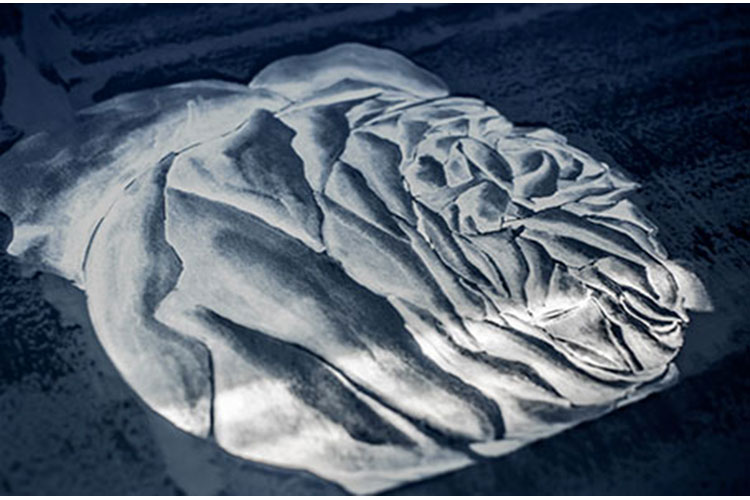 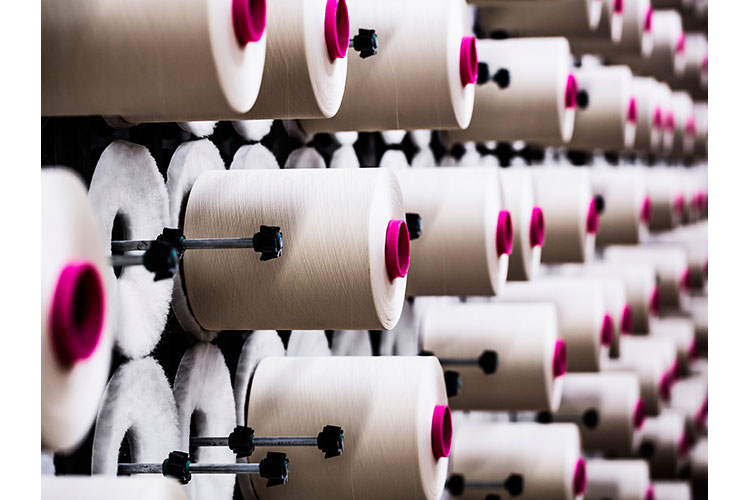 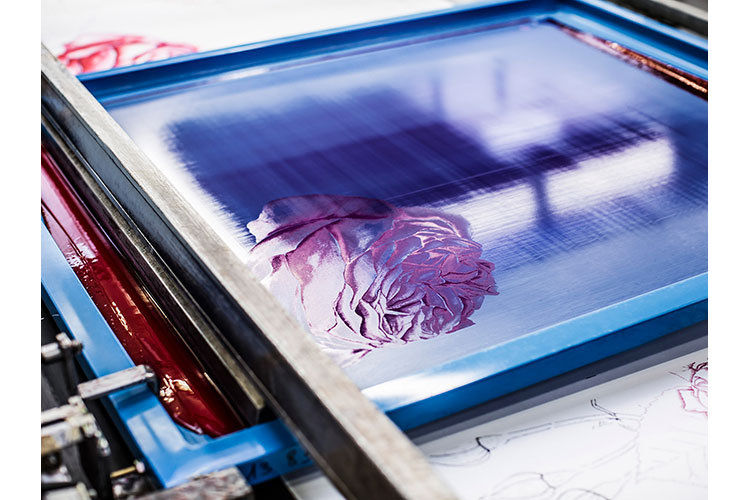 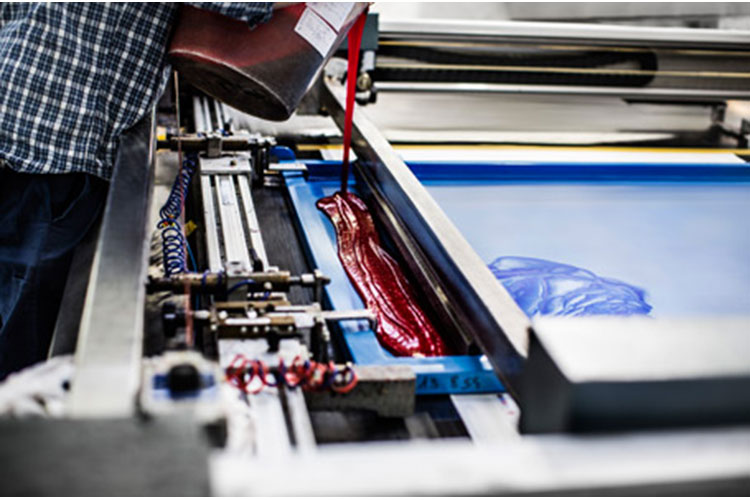 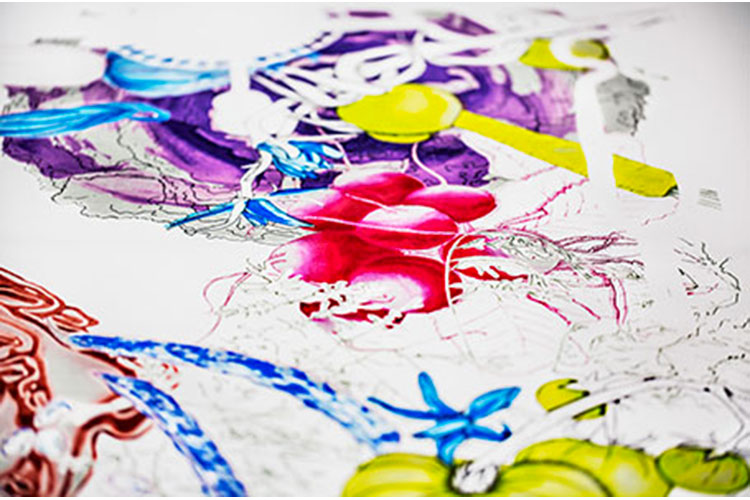 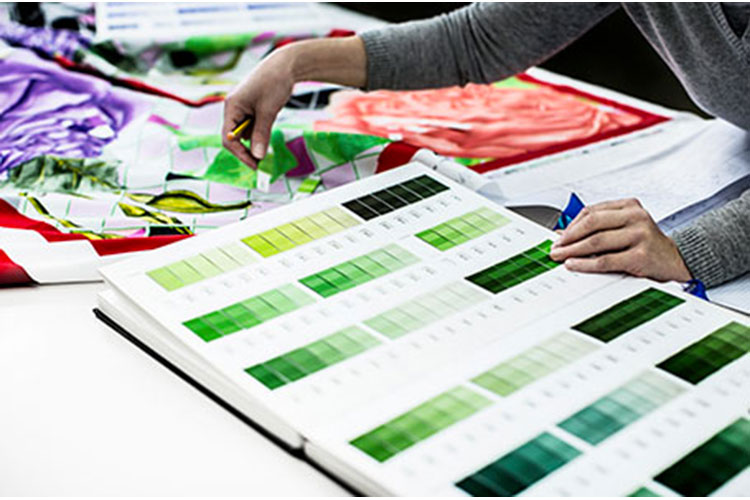 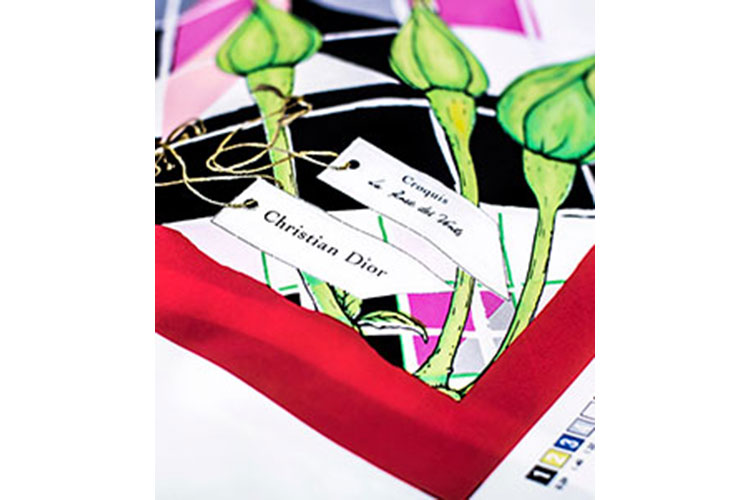 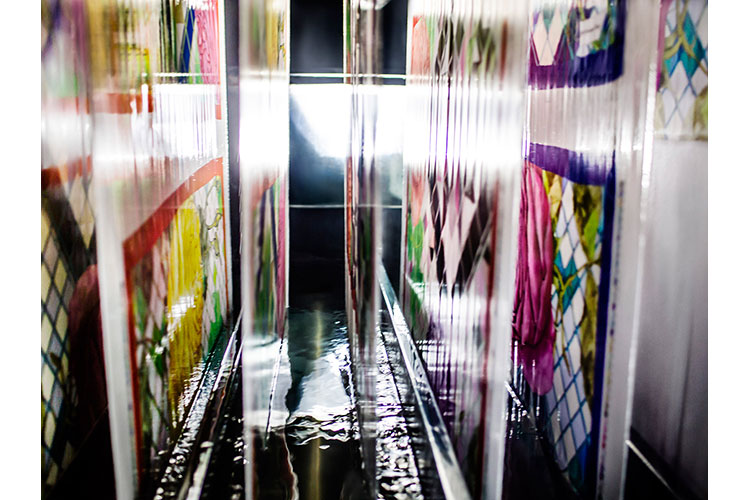 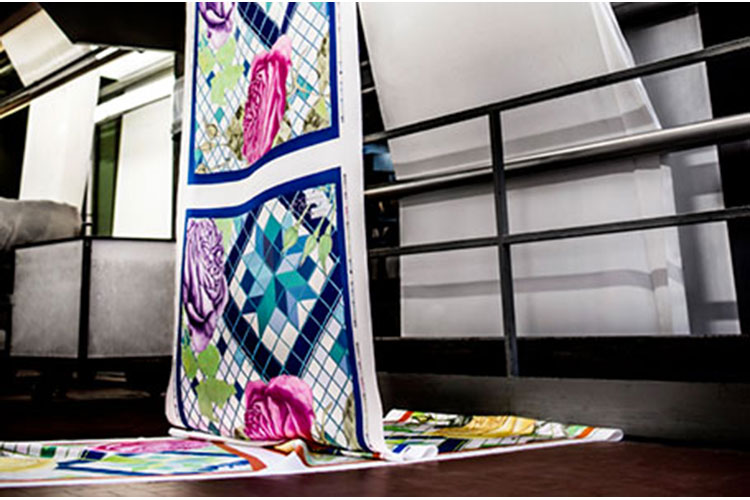 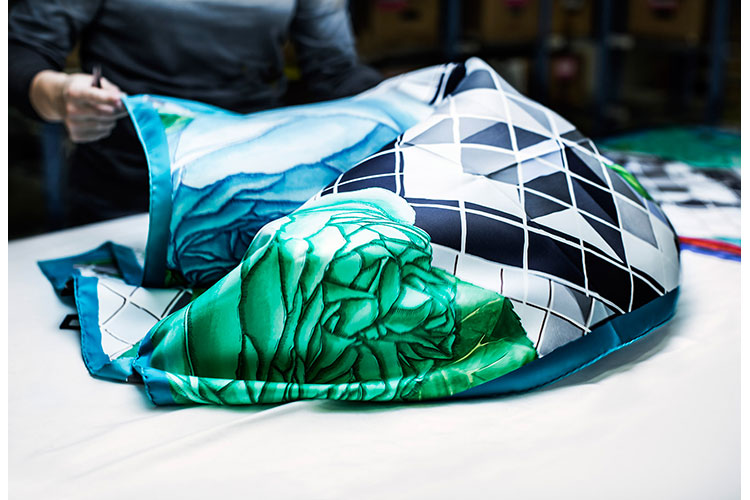 "A scarf is often the final touch to a dress, and the way you tie it expresses your personality", Christian Dior wrote. The couturier saw it as an honoured way to express his love for colour and flowers, and he liked to think up silk scarves in vibrant shades and sensual textures, truly wearable works of art. Today, House of Dior continues this heritage and makes its scarves using an ancestral expertise, in the best Italian ateliers not far from Lake Como.

The design studio honours the unique legacy of Dior, creating scarves in dazzling shades and poetic designs every season. The drawing is initially done by hand, on paper and to scale. After its lines have been drawn in pencil, watercolours are used to express the most nuanced shades in all their subtlety. Once computerised, it is then deconstructed. The studio makes as many films as the drawing has nuances, and each film groups together all of the patterns in the same colour. For just one scarf, up to forty-seven different films can be made. This stage is long and meticulous, but it is essential in order to get a perfectly rendered outcome which is consistent with the original drawing.

The silk for Dior scarves is dyed using the ancestral screen printing technique. For each shade, the ateliers produce a frame etched with the pattern to be printed. First, a canvas is stretched on a metal frame and a primer is uniformly applied. Then a laser etches the canvas: this stage requires absolute precision. The primer is partially removed on the area to be coloured with one specific shade. This process makes the area permeable, and the canvas allows ink to pass through it during printing, like a stencil. In this way, the ateliers produce as many frames as there are colours in the design— up to forty-seven for a single scarf. To create its exceptional scarves, Dior uses the best quality silk in the world. Originating from China as in Marco Polo's era, the silk benefits from ideal climatic conditions and the ancient expertise of the Szechuan region. Harvested during the silk cocoon's unravelling, the threads of this exceptional raw silk are naturally off-white. After a long journey across the world to the Italian ateliers, they are put onto the loom's weaving bobbins, which will transform them into the soft and remarkably dense cloth— the silk twill.

After weaving, the new silk is rolled out in a long ribbon across several tens of metres, and coloured using the ancestral screen printing technique. A first frame is placed at the base of the raw silk. Coloured ink is then applied, penetrating only in the areas where the primer was removed during the frame etching process. This technique makes all the patterns in one colour appear on the scarf, slowly bringing it to life. Once the ink has dried, the process is repeated with a second frame, then a third, and so on, until all of the colours in the original drawing have been layered onto the silk. For scarves with up to forty-six different shades, it can take up to fifteen hours of printing.

The freshly printed piece of silk goes through a series of carefully designed operations to ensure that the scarf has a perfect finish and an unparalleled sensory quality. Firstly, it is passed through steam at a very high temperature to set the colours and ensure their long-term brightness; it is then washed in several different containers to remove any ink residue. Then, it is passed through a number of carefully-measured baths to achieve the perfect look and feel: the definitive touch of Dior's creators. Finally, the squares of silk are separated from each other by cutting the piece of silk with a laser.

The term "rolling" refers to an ancestral practice: always done by hand, the scarf edge is rolled back on itself before being pinned and hand-sewn. This process requires all the artisan's precision, as this is what guarantees the scarf's flawless finish. Lastly, the workers scrutinise each Dior scarf for a final time: they repair and correct any flaws which may have slipped through the multiple checks performed during their manufacture.

Once they leave the ateliers, Dior scarves attract attention due to their bright colours and delicate patterns. The hand is seduced by the unique, luxurious softness of their silk. The House's scarves have achieved Christian Dior's dream, as they are now tied, in a thousand and one different ways, around the necks of women all over the world.