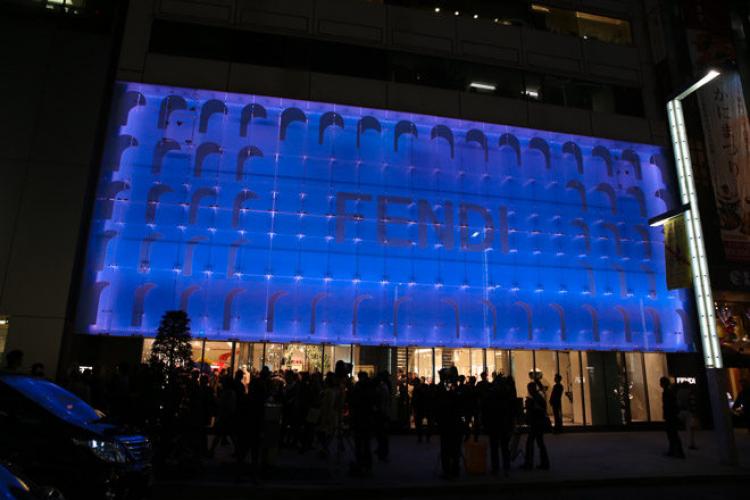 Fendi treats Japan to an oversize pop-up store for one whole year. To celebrate the 50th anniversary of its presence in the country, the Roman fashion label owned by the LVMH group has set up a "huge recreational pop-up store" in Tokyo's luxury Ginza district.

The store extends over three levels and it's the first Fendi store in Japan showcasing in one venue all of the brand's men's and women's collections, from furs to accessories, the label stated.
Fendi's Ginza pop-up store in Tokyo will stay open one year
The store concept is uniquely inspired by the Palazzo della Civiltà Italiana(Palace of Italian civilisation), a historic rationalist-style building located in Rome's modern EUR district, where Fendi has recently established its headquarters. The Tokyo store's façade features a blue neon rendering of the Rome building's famous arches.

The mood inside the store is relaxed and fun, "like that of a theme park", stated the press release, emphasising how the recreational atmosphere is of course "always sophisticated." A giant version of the Karlito doll, conceived by Fendi's Creative Director Karl Lagerfeld, has pride of place next to the famous Italian three-wheel 'Ape' scooters.

A mini-theatre plunges visitors in the world of cinema, seen through the brand's own perspective, while a huge tape player sits amidst stacked speakers in the menswear area.

To celebrate its ties with Japan, Fendi also exhibited inside this very special pop-up store the artwork called 'Fur Tree' by Japanese artist Makoto Azuma, who specialises in unusual floral compositions. The 'Fur Tree' will be covered in furry pink flowers in spring...