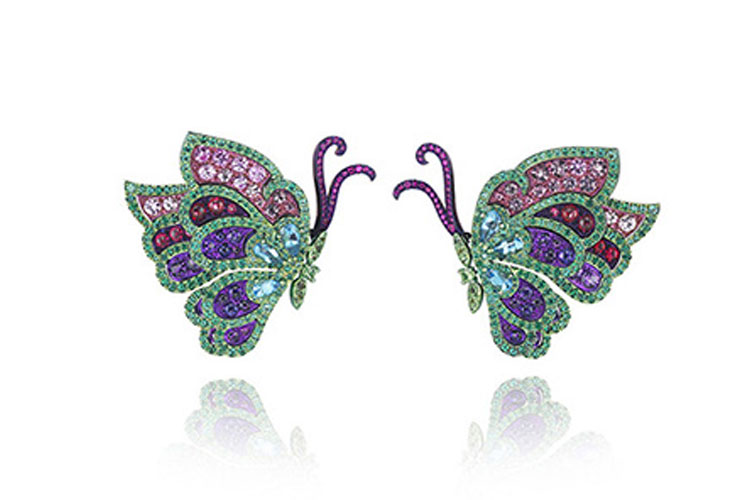 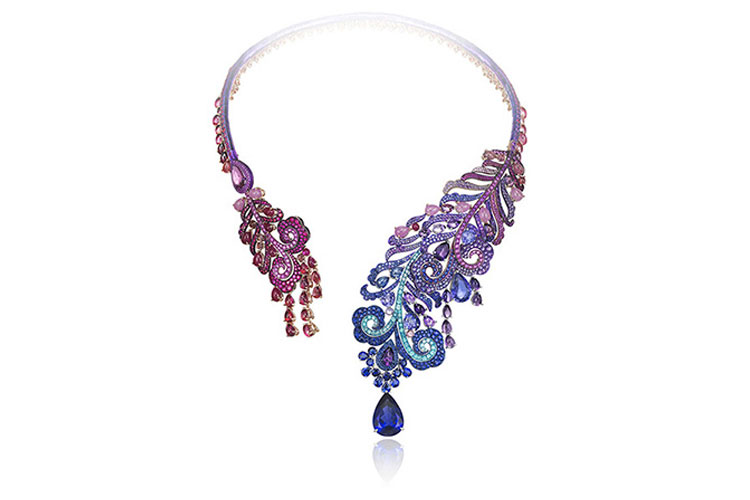 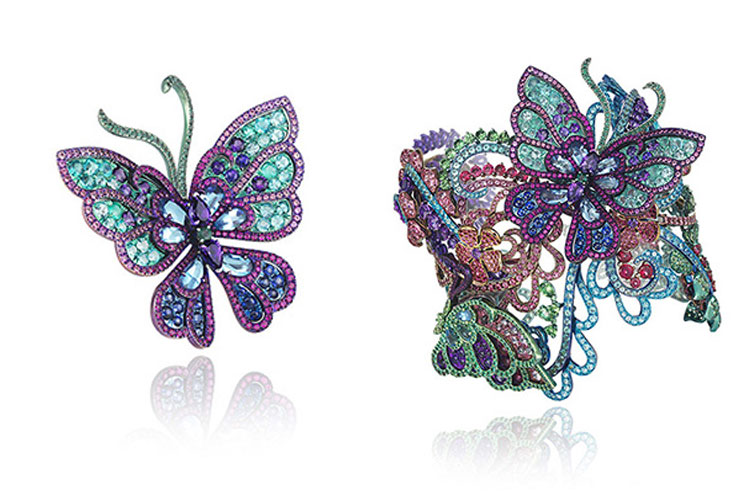 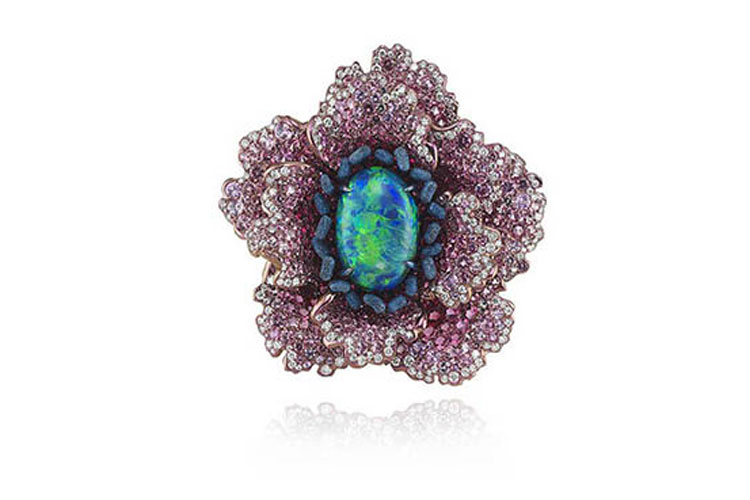 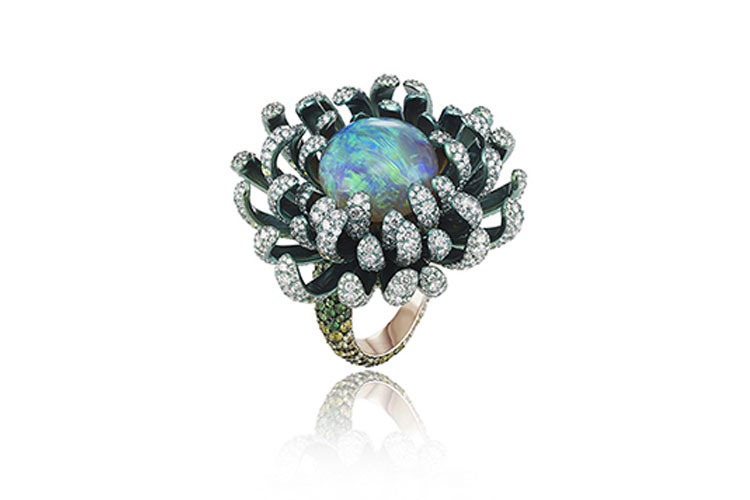 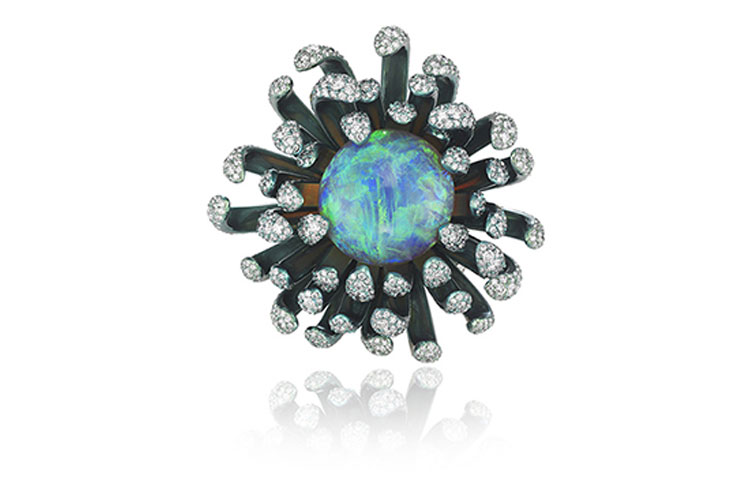 Inspired by enchantment and exalted by the artistic crafts cultivated by Chopard in Geneva, six exceptional floral rings feature the legendary opal. The first three pieces of this capsule collection were unveiled in July 2015 in Paris and Chopard is presenting three new creations during the Paris Haute Couture Week in January 2016.

Because a magic spell wouldn’t be one without a degree of mystery, the opal has journeyed through history while losing none of its power to fascinate. Opulent, smouldering and flamboyant, it consistently fuels fantasies and the collective imagination. Today, it shines in a collection that is entirely in harmony with its aura. In Chopard’s extraordinary garden, wonderful opal flowers have blossomed, combining titanium or zirconium with sapphires, amethysts, tsavorites, rubies, spinels and black diamonds. After Animal World, Chopard is exploring the plant world and its many wonders. The result is unique pieces with a design which is testimony to the genius of goldsmithing exercised at its highest level, mirroring the artistic crafts in Haute Couture. The opals used for this exceptional capsule collection are traceable and come from a sustainable supply that complies with ethical and environmental criteria. Chopard is proud to work with the Aurora Gems opal mine, a family-owned business founded in 1962 at the outback of Australia. The Hatcher family at the helm of Aurora manages the mining, polishing and sale of their opals, without any outsourcing whatsoever, thereby guaranteeing total traceability.

The opal, from stone to exceptional jewel

By turning his opal ring, Gyges became invisible. From the dawn of time, Greek and Roman mythology has represented the opal as a stone considered to have magic powers. From the Middle Ages to the Second Empire, the opal has suffused history with its fiery radiance and has never ceased to nurture its own myths. Powerful and subtle, resplendent and iridescent, the opal fascinates with its own special light that seems to imbue the stone with a life of its own. Its mobile nature, changing colours and elusive reflections have led the opal to be considered a symbol of wholeness, a sacred manifestation.

Chopard has masterfully captured the complexity and power of the opal. The Geneva Manufacture has orchestrated an encounter between this stone with its thousand secrets and contemporary creation. A collection of six rings, resembling vibrant talismans, demonstrate all the dreamy romance that jewellery can convey when shape and material create a perfect alchemist’s blend. During the Paris Haute Couture Week, Chopard is raising the curtain for the second act of this collection by revealing the last three creations.

Mysterious. Precious. Dangerously captivating… Chopard’s opal flowers whisper secrets from the depths of time and bear the stamp of an age-old beauty. All three set the scene for the precious black opal associated for example with titanium. The latter is an extremely light metal that may be coloured with a wide range of hues, providing scope for all manner of fanciful interpretations. It takes on its full dimension when appearing alone, or else may be rendered invisible beneath a subtle gemsetting. Meanwhile, zirconium is making its first appearance in Chopard Haute Joaillerie creations: its hardness enables extremely high-precision workmanship.

Chopard presents three new rings with a spring overtone. The first highlights a 10.7-carat black opal majestically enthroned in the centre of titanium petals adorned with tsavorites, pink sapphires and demantoid garnets. The second is graced with a 14-carat white opal – a first in the collection – nestling amid diamond-set titanium petals evoking an imaginary flower. The third and last ring of this trio features a 9-carat black opal surrounded by pistils in engraved and brushed blue titanium. The large petals set with diamonds, pink sapphires and spinels, mounted on a ring set with demantoid garnets, instil this opulent flower with a foretaste of Spring.