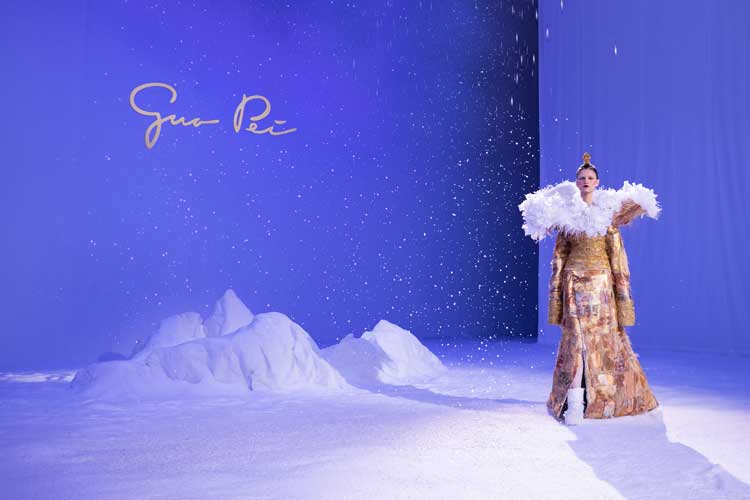 The Himalaya is not only the highest mountain range in the world, but is also a symbol of Asian sacredness and mythology since ancient times.

Guo Pei has chosen to be inspired by the magic of these places for her Haute Couture SS2020 Collection.

The dresses are theatrical, beautifully structured with Japanese obi belts, embroidery with sacred Buddhist Thangka motifs and lotus flowers and snowflakes carved on kilometers of tulle.

Although the Himalaya does not properly lead to a summer thought for a Spring Summer Collection of dresses, the designer has masterfully expressed her unbridled imagination, where she meets the arcane symbolism in wonderful clothes that if observed closely, express a sense of pure wonder, admiring the filaments of fabric released in the wind.

Guo Pei has interpreted this mysterious and spiritually powerful place.

The fabrics of the collection are ancient, as often happens in the designer's maison, which she reworks with excellent craftsmanship.

Precious silk kimono belts have been used and reassembled on the back, showing the thread in a wonderfully worked fringed weave.

The fabric is also cut for tubular capes that gently glide on the floor or with imperial capes embroidered with tulle that give the body the perception of being dressed like a white fur that seems to be snow.

The creative spirit of Guo Pei gives this collection that mysterious feeling of idyllic divinity that the woman expresses in its most complete sacredness, as the Himalayas represent it for Asian culture.