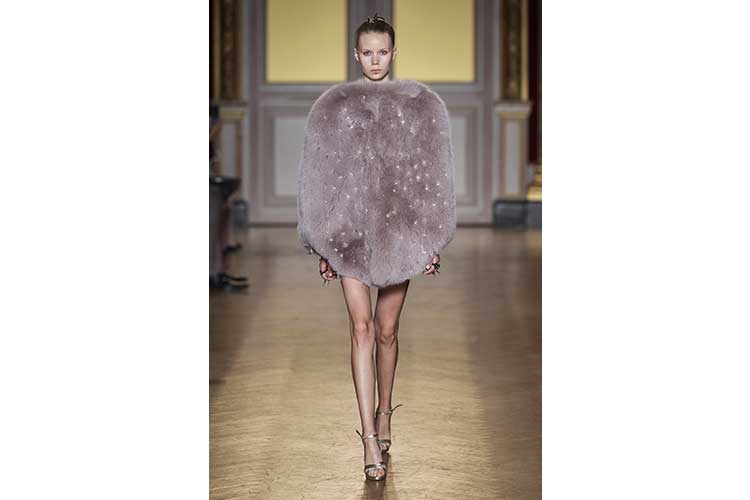 "When I'm good I'm very good, but when I'm bad I'm better". You enclose in this sentence, the new collection to 2019/2020 of Antonio Grimaldi that takes its cue from Mae West and from his irreverent character in the movie "I'm no Angel" (1933), who saw the screenwriter and protagonist next to Cary Grant. Circus Domatrice mangiatrice, of men, the femme fatale, equipped with a spicy sense of humor that loves to flirt with rich men and powerful. A character irreverent and scandalous in America perbenista of the age who consecrates Mae West as Hollywood star thanks to his inexhaustible verve.

Around Mae West, a woman is strong and independent with hints surrealists, which inspired Salvador Dali for the famous opera "Portrait of Mae West which may be used as apartment", Antonio Grimaldi builds a collection of high fashion that takes its inspiration from the same Mae and by the films in black and white.
Thus the colors palette resumes, first, the black and white of the old films with all the nuances that there are to be found: from sand gray to gray anthracite up to the gray Rosato. In contrast colors surrealists: red, purple, pink. Colors and nuance "bad" that find expression in dresses characterized by architectural forms asymmetrical, marked by lines and curves that chasing.

In addition to the crepe cady - a classic of the maison - alternate and overlap different fabrics like velvet, and chiffon, the duchesse, gazar and tafta to which are applied special workings. Thus the duchesse is specially yield more soft and light, giving improved fit, or the tafta is double with the cady.
Still, the clothes in plissé soleil chiffon have a rain of folds radially that sprouting from cracks and cuts which overlap or the blouse balloon of gazar (triple organza) that shows voluminous, lightweight and transparent with inserts of crocodile together to clothes with effect trompe l'oeil which draw a hood fluttering.

The leitmotiv of the collection: cuts skewed that, as strips of fabric giant wedged between them, Shape on body, as the tradition of high fashion imposes. To embellish the heads, embroideries, modern and romantic ever. Example of original workings, made of metal and iron, lacquered black, chains and crystals facetted that create grids and cuts, exalting the transparencies. The feathers of Pavone champagne color emphasize the lightness of the heads.
Together: a game of belts of metal with fringes and belt bag applied that are part of the garment.
Complete the look of the modern Mae West, jewelry tailored by French jeweler Delettrez Bernard. Piercing on the mouth, clips for hair and bracelets by hand with bosses pointed and a surrealism that translates into rings that depict the hands and mouths, necklaces in the shape of a finger that underline the dreamlike side of bad girls designed by Antonio Grimaldi.
Thanks to the collaboration with the Neapolitan company "Prince of elegance", the masculine look are inspired to a Cary Grant contemporary and realized according to the rules of the best Neapolitan tailoring, whose silhouette is given by soft lines which follow the body, sinuous shoulders and round pockets and curves. Dresses tailored, rigorously hand-sewn, with wool fabrics (as the gray flannel, the tweed and the cool wool) which create a male wardrobe stylish and modern.

Fabrics pied-de-poule, working double for outerwear, complete flannel and tuxedo from evening to wear in contrast with dolcevita black leather incattiviscono that i look.