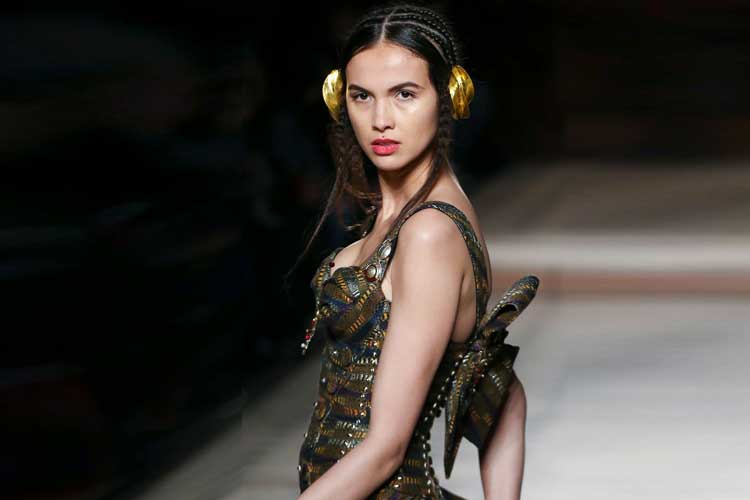 Julien Fournié is inspired by great female adventurers who go through the history of humanity and female emancipation.

Explorers, ethologists or archaeologists, they prove themselves capable of roaming jungles and dancing waltzes.

Their curiosity about the world, their thirst for independence and the quest for their own truth include the courage of disobeying social codes.

Whether they are discovering South America’s pre-Columbian civilizations, Africa’s scriptless tribes or the Sahara’s Berber and Tuareg arts, they give up nothing and neither reject the society from which they come, nor contradict the worlds they are exploring.

Far from the masculine values that led to predation, via colonizing or evangelizing, their conquests advocate mutual discovery, acceptance of differences, mutual aid, sometimes at the cost of their own life.

In addition to the expedition they have planned, organized and financed, they are constantly seeking the hidden meaning of the world, beyond appearances, genders and borders.
Combining phlegm, enthusiasm and compassion, they adapt to everything, collect tools, pottery,jewelry let nature transform them, and blend into the landscape without losing any panache.

Mastering the cut, the French couturier builds statement silhouettes around more casual attire, adorned with talisman-like embroideries or amulets as if collected from previous encounters and locations.

Shapes are often structured with multiple strap belts, including bags or bandoliers which symbolize, for the discoverers of new territories, together with braid, an essential equipment. Far from any precise identification with a single geographic or ethnic origin, these ladies mix the elegance from their original lifestyle together with the fantastic treasures they have found on the way, in a personal interpretation, as far from communitarian ardor as from any indoctrinating spirit.

“Haute Couture and female explorers do share a taste for experience, pragmatism and encounters which established dogmas hardly encourage and often despise,” says Julien Fournié. “I am convinced that the search for freedom is our common point in order to imagine the world off the marketing of fame’s overbeaten track, as a way to save the planet and mankind.”