Legend of the White Snake 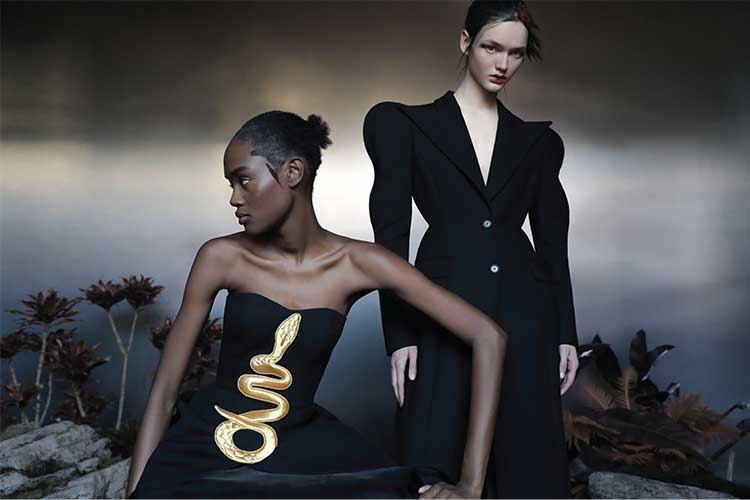 Throughout her F/W 20-21 collection Judy Zhang is able to keep on narrating the “Legend of the White Snake”, a trilogy developed on three different collections. The first one is told by the SS20 collection, utterly focused on the saying “Duan Qiao Xiang Yu” which refers to the fateful meeting on a bridge between the white snake and her lover Xu Xian.
The second one comes to life thanks to the F/W 20-21 collection, where the creativity of the designer is inspired by the tale in its turn strongly influenced by the movie “Green Snake”, Tsui Hark 1992. The third and last work will be discovered with the mysterious SS21 collection….

The unquestioned protagonist gives a clear attitude to the entire collection, representing herself the most iconic scene of the legend, Shuî Màn Jīn Shān, where the white snake fights for his life in order to protect her beloved.
The entire scene is centered on a blurred image of the sky, water, mountains and the smokey smell of the battle. The white snake’s sister, Green snake, fights by her side proving an unconditional courage which symbolizes the new theme of this season: “fighting for love”.

The scene gives a visual inspiration to the collection and the graphic gets modernised with a depiction of an american smartphone displaying a text saying ‘aiuto’, italian for help. The three worlds represented in this scene - China with its legendary tale, America with its signature mobile and Italy with text words - fully embody the bond between the occidental and oriental culture, wisely mixed by Judy in her collections.

The color palette selected for this season is white snake’s white and green, besides black and red whereas gold is reserved for the snake’s embroideries and for the glistening fabrics which remind her own skin.