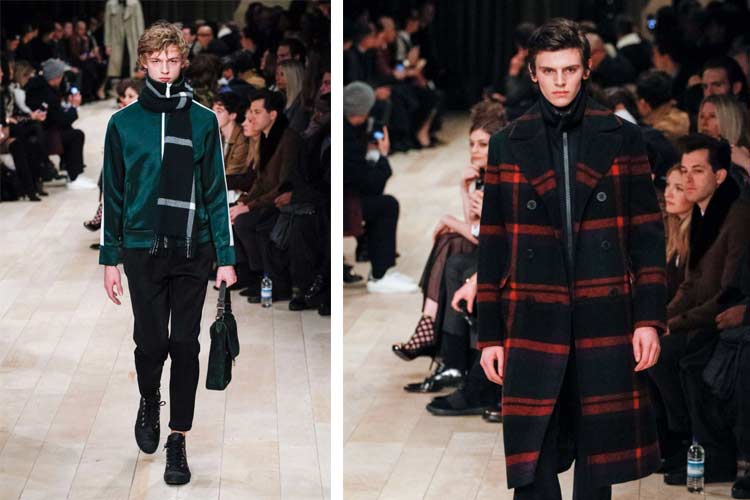 We could not miss a shadow of melancholy on parade with which Burberry presented in Kensington Gardens, in the sign of glamor, his men's fall-winter 2016-2017. He could not miss the day of the death of David Bowie, London music legend, but also an icon of British style in the world, the late eccentric and colorful youth to the more recent, rarefied and sophisticated. And were the notes of his music to make it hover for a few minutes on an audience moved, VIPs and not before the catwalk popolasse.

Burberry - Fall-Winter2016 - Menswear - London - © PixelFormula
Then, as always in this world, she turned the page. 'The show must go on', according to the most banal and yet appropriate slogans. And the show of Burberry, in an atmosphere composed, as it wants the style of the house directed by Christopher Bailey, has not reserved disappointments: judging by the applause and the first comments of an audience which featured the faces of Steve McQueen, director award Oscar '12 years with slave ', the singer Mark Ronson, the supermodel Jourdan Dunn (heir announced Naomi Campbell), the young actor Alex Lawther, Gabriel-Kane Day-Lewis, son of Isabel Adjani and Daniel Day-Lewis, or Brooklyn Bekham, teenage model of stable and eldest son of David and Victoria Beckham.

Burberry - Fall-Winter2016 - Menswear - London - © PixelFormula
Accompanied by the melodies sometimes painful played on the ground by the emerging Anglo-French musician Benjamin Clementine and streamed for the first time by Apple TV, the show has seen alternating black and beige, and the inevitable checkered checkered fashion house to the warm colors not without touches of red or navy blue and some glitter. Cared and high quality, from cashmere to fur, materials, but with elements of 'experimentation' cuts of some leaders and the choice of accessories.

So, alongside the more traditional duffle and trench coats, jackets and oversize coats here. Or the rediscovery of the bomber, the unusual bags male (Satchel), casual shoes with a certain fondness for the sneakers and underscores more casual than in the past. Members and short pants, with episodic concessions to lure metrosexual sequins, or rather with the edge flared. Detail, the latter, took hot online edition of Vogue as one of the few not 'quotes' from the collection in honor of the' 70s. The decade marked by the rise of the star of David Bowie, even if on purpose.