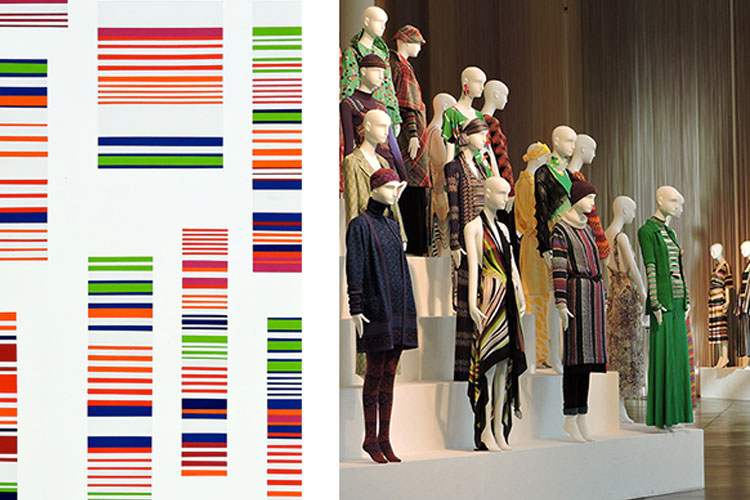 Hosted by Fashion and Textile Museum in London the retrospective, “MISSONI ART COLOUR”, that will run until 4 September 2016, explores the creative process of Italian fashion house Missoni and the textiles of Ottavio and Rosita Missoni in the context of 20th century fine art. One of the most respected exponents of the ‘Made in Italy’ concept, the work of Ottavio and Rosita Missoni is deeply rooted in modern art making the Missoni brand distinctive in the world of international fashion.

“MISSONI ART COLOUR” showcases over 60 years of fashion alongside paintings by leading 20th century European artists, and previously unseen textile studies, paintings and Arazzi by Ottavio Missoni. The personal artwork of Missoni is mixed with modernist masterpieces, including the work of Sonia Delaunay, Lucio Fontana and Gino Severini, that have influenced Ottavio and Rosita in the development of their signature graphic style. These works are drawn from the MA*GA Art Museum, Gallarate and from private collections in Italy, and the majority have never been exhibited in the UK. The selection of fashion looks, designed by Angela Missoni since 1997, is drawn from the company’s archive, starting in 1953 to the present day.