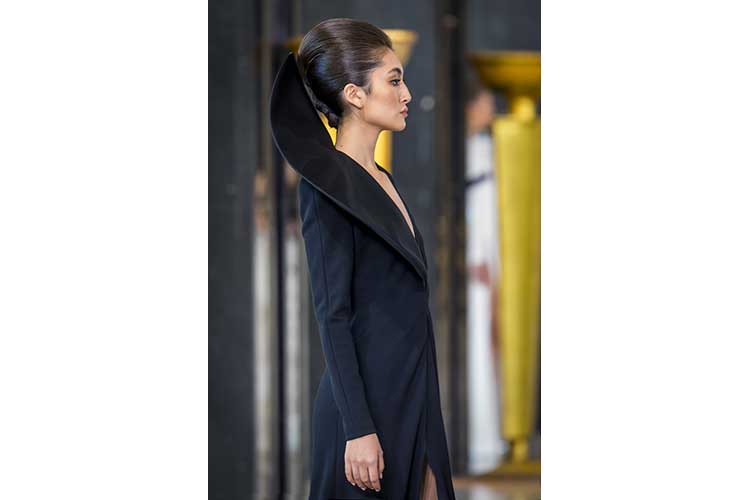 A circle is a symbol of eternity and  harmony, with no beginning nor end.

It is the balance of life. The circle is also lunar, the way a moon often hints a feminine divinity.

The curtain  rises on a big coat  of gazar, like a middle  eastern prince’s, worn on an evening pyjama  in ivory crepe. Then steps forward a half-poncho made of concentric circles.

Later on, a spheric jumpsuit in grainy crepe with silver embroideries transcribes with each step, every shift of the body. The flow is yet again architectural, driven and  spectacular.

A white jersey sheath dress  blooms out of a bouquet of half circles on the ankles, skirts are draped in loops and  reveal a hip or a leg, all the way to the waist.

The gowns and  jackets’ shoulder lines are squared and the lapels, circular.

The style is minimal but strong. Stéphane Rolland for this summer 2020 goes to the essential and  affirms his gesture.

A silver bustier is holding  a cage of gigantic orchids made of black  and  white gazar, an  other  is entirely covered with topaz  or yet, circled  by a sculpture of silver and  smoked crystals  or embroidered with feathers on a big transparent gauze skirt.

The allure is soft, milky, cloudy. The aspect remains light, floating, like the sculptures of white sequins embellishing a bust  or black  Samothrace’s like wings on the hips of a bustier dress in nude iridescent chiffon.

The colors are fundamental. Black, white, cream … but punctuated with browns, bougainvillea pink and  Klein blue.

Metallic embroideries made of silver mirrors, crystals and  chrome spheres  are shimmering but  with the  sole purpose of emphasising a curve or finish a movement.
The movement, incidentally, is a constant pursuit of a dream and  accuracy.
Infinite delicacy.