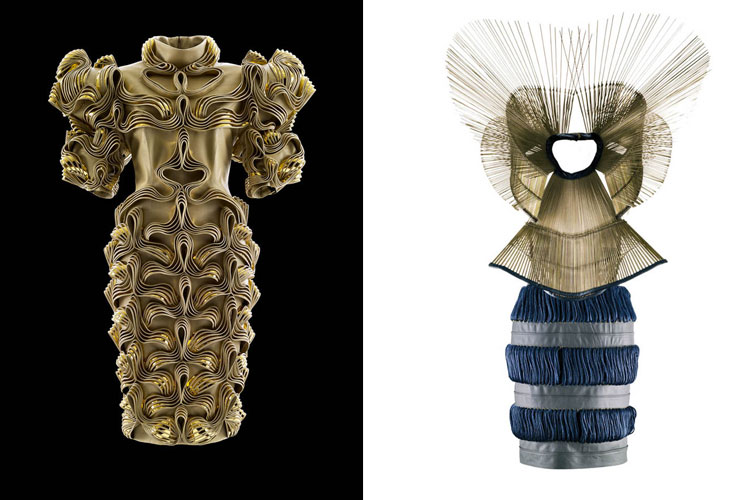 In the last few years there have actually been quite a few collaborations between architects and fashion designers that introduced something completely new and previously unseen on the runways.

In previous posts we looked for example at the way Iris Van Herpen launched an architect-couture dialogue with Canadian architect Philip Beesley that developed a cross-cultural approach resulting in the creation of experimental shapes and silhouettes and hybrid fabrics suspended between high fashion and ready-to-wear.

The latter was based on the concept of terraforming and the creation of synthetic terrains, including new planetary surfaces. The pieces were made by thermally forming laser-cut acrylic sheets to create lightweight, foam-like meshworks, combined with other materials such as polyurethane, silicones, leather, and crystals.

The resulting acrylic membranes were transformed into malleable geometries of chevrons and meshwork textiles through processes of three-dimensional fused deposition printing, injection molding, vacuum forming and laser-cutting that guaranteed the material flexibility and dynamism.

The concept of terraforming - that is transforming a landscape on another planet into one having the characteristics of landscapes on Earth - points back to Beesley's studies on geotextiles, materials that integrate into the landscapes creating an intermeshing of natural and technological.

The resulting material in the A/W 2015-16 collection ("Hacking Infinity") seems to look at the possibility of creating new geologies in fabrics with the black latticework of the dresses and top growing into a fertile matrix or an architectural textile.

People interested in discovering how certain fabrics from these collections have been developed should check out the exhibition "Iris Van Herpen: Transforming Fashion" at Atlanta's High Museum of Art (until 15th May 2016).

The event, developed in collaboration with The Netherlands' Groninger Museum that launched three years ago the first exhibition focused on Van Herpen's designs, features three pieces from each of the 15 Haute Couture collections by Van Herpen, arranged chronologically.

There is plenty to see from a piece made using ribs of children's umbrellas and industrial boat filament yarns to 3D printed garments inspired by fractals and created using stereolithography; from pieces made by laser sintering a rubber-like material, called thermoplastic polyurethane 92A-1, to an iron-filled polyurethane resin that can be manipulated by magnets, developed in collaboration with Dutch artist Jólan van der Wiel.