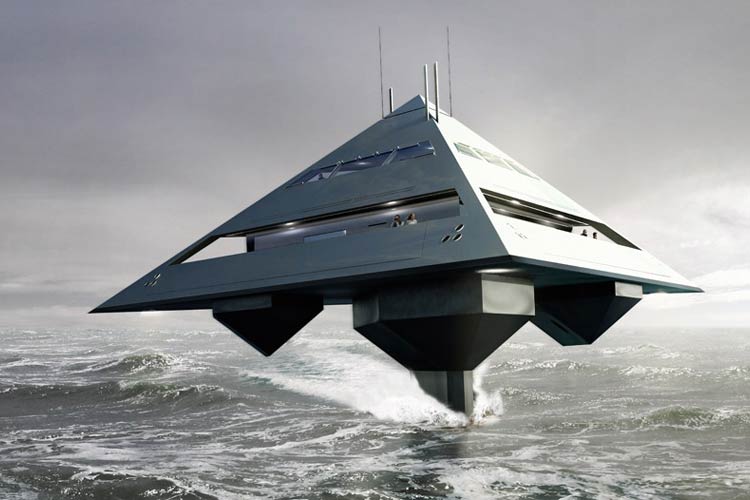 If aliens or ancient Egyptians wanted a yacht would probably be this conceptual superyacht created by Jonathan Schwinge with a pyramid-shaped body that would lift itself above the water at high speeds, the futuristic “Tetra yacht”, which takes its name from its unusual tetrahedron shape.

Hydrofoil boats have hulls fitted with shaped vanes – known as foils – underneath, which lift the hull clear of the water when travelling at speed. This reduces drag on the water's surface and allows the vessel to move faster.

Working on the same principle, the Tetra would travel using three hulls on its underside at low speeds.

When it picks up momentum, a torpedo-shaped strut would extend down – helping to lift the yacht out of the water using its rotating side-mounted adjustable foils.

Once above the surface, the boat could provide a smoother ride in stormy ocean conditions, according to the designer.

“Tetra” would be built using a carbon-fibre superstructure with stainless steel. It would accommodate six passengers and four crew members.

When docked, portions of the luxury yacht's three sides would fold down to become enlarged deck areas and horizontal panels could emerge overhead to provide sun shades.