The Art of Chinese Imperial Jewelry 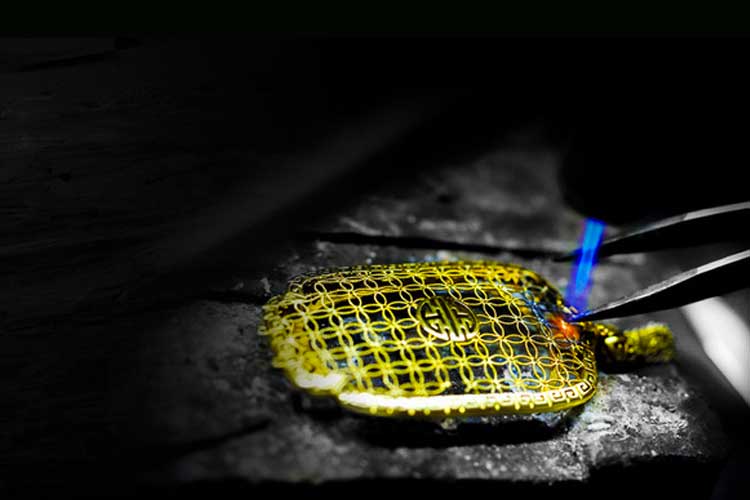 Light, prosperity, good fortune, the Chinese character of  C 熙 has a very positive meaning. The logo goes even deeper in symbolism with it's two headed dragon from the Longsham culture embodying the former imperial family. The goal of the brand to reimplement the ancient Chinese knowhow stands on this pedestal of in-temporality, permanent self-improvement and transmission.

Jewelry tradition can be dated back as far as 8000 years in Chinese culture, since then, it promotes the “unity of nature and man”*. Gold and lapidary craft have been, in the last centuries of the imperial China, reserved only to nobility. With the arrival of the communist revolution and later the industrial rapid development, this ancient technics remained dormant in the heart of only 10 masters. Cynthia Ruan, the owner and soul of the C house, lover of Chinese art and folklore since her childhood, devoted ambassador of oriental culture, artist herself and philanthropist, engaged in 2005 in a fabulous journey. Her quest shifted rapidly from buying antiquity rare jewelry and repairing them into the revival and  creation of new collections in the “art of Chinese Imperial Jewelry”.

In accordance with the standards of ancient royal workshops of the Qing Dynasty, Ms Ruan  has  established  her  own  atelier.  Apart  from the transmission  of  traditional craftsmanship, her team also works with the latest techniques, such as micro-inlay, mixed veneer and wax engraving, mixing them with the ancient skills. In the C workshop, the royal art of fine gold gets infused with the vitality of our modern world. *

In-order to arrive a this museographical perfection, they had to rebuild tools and tables long abandoned by the metal workers. The royal dimension for a gold thread is of 0,1 mm, or lets say, a 6th of a hair. Their world wide acclaimed “demonstration” if I can humbly call it this way, was the reproduction of the Golden Wire Crown of  Emperor Wanli of  the Ming Dynasty. Museologists recognise that a few years ago this would have been impossible. The 518 - 0,2mm gold threads offering a uniform pattern with no joint or visible wire end, the vivid dragons, all weighting only 826 grams, used to be a jewel of maturity for the emperor, it is a craft of maturity for the C high jewelry house.

We had the chance to observe antique jewelry from her own collection, like this incredible light and delicate princess crown. This piece is not only enclosing ancestral knowhow but a hole cultural heritage. The intricate construction was a token of well-behaviour. The delicate flowers seem alive and move at the slightest vibration. Stillness  was nobility.

Hair pins, a perfume bottle, a royal necklace, the reproduction of the emperor’s crown, all filled with symbolism, social codes and history. This pieces allow us to travel through time and open a door in  the fabulous ancient China.

The new collections are not only achieving technical perfection but they bring to us, as well, the ancient perfume. ”The Uncomparable Beauty of the Goddess of Water" released in 2017, is inspired by a 1700 years old love poem. This collection is an ode to freedom, love and carpe diem: "the present possession is already an eternity” Cao Zhi, prince of the Wei and Jin dynasties, is telling us over the ages.

"A Moonlight Night on the Spring River” also inspired  by  a  poem,  “A  moonlight  night  on  the spring river”by Zhang Ruoxu of Tang Dynasty, the jewels are telling us about river journey unlocking the  imagination  and  love  for  nature.  Here,  the 41,88ct crimson Nigerian Turmaline, looks alive, the symbol of falling flowers is the endless circle of life.

"Guardians- Twelve Zodiac Signs" 2018, represents 7 year of work using more than 30 different gemstones.
The exhibition presented also pieces from older collections, like “Fantasy in the garden” from 2014 or “Ostrich and Phoenix Recital” 2008. With the white coral peony flower, symbol of China, this exclusive necklace is representing the independence, honor and splendor of Chinese women.

Present for the second time during the Haute Couture fashion week in Paris, C is everything of  an Haute Joaillerie house. History, traditions, unique craftsmanship, signature pieces, rarity of gems, collections of incredible story telling power, technical achievements   and of course, sur-mesure pieces, all with a hereditary service.