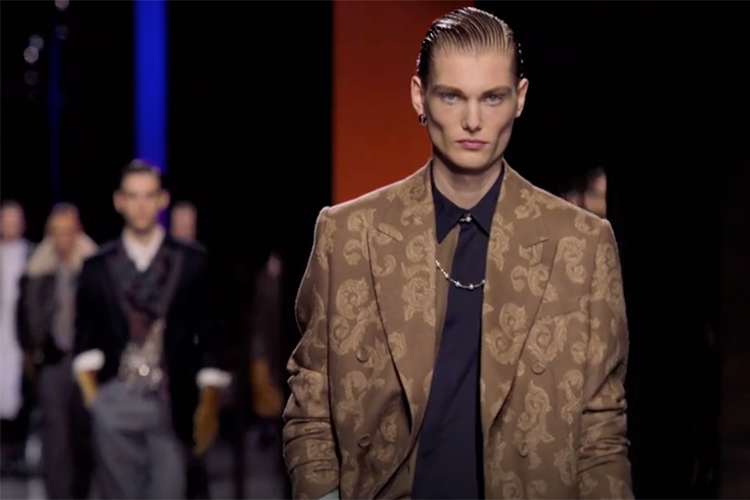 Past, present, couture. For the Dior men’s Winter 2020-2021 collection, Artistic Director Kim Jones draws on the Dior archives and iconography to celebrate the House’s timeless elegance. A journey to the heart of haute couture and a tribute to Judy Blame, a pivotal figure and a symbol of creativity that always looks to the future.

The silhouettes explore values of excellence and authenticity, evoking fashion not just as a finished product but as a creative process. Clothes, shoes and accessories sport engineered zips that enhance their construction, highlighting details and cut as an ode to Christian Dior’s love of architecture. The Dior Oblique canvas is revisited in beaded embroideries, while the Dior logo is pierced with a safety pin - a nod to Judy Blame’s DIY-inspired style.

House codes, like reminiscences of haute couture, are embodied in the moiré effects of silk, embroideries, and the arabesque motifs and paisley patterns that make Dior’s heritage so rich. Opera gloves complete each look and buttons covered in fabric - like those on the iconic Bar jacket - appear alongside a panorama of memories: shades of gray and blue, plays on volume, and pleats and draping that reference flou and tailoring techniques.

Accessories evoke the mid-20th century, a turning point in fashion history. Shoes have a classic allure, reflecting the exceptional leather craftsmanship that represents another aspect of Dior’s heritage. The Saddle is revisited in new, ever more fluid forms as the Soft Saddle; bags recall graphic briefcases and camera bags. Crafted in polished calfskin, they come in a discreet palette of black, camel-vicuña and navy blue, and feature the signature Dior Oblique motif enhanced with beading or in a handmade tapestry version.

Drawing inspiration from the toile de Jouy motif that decorated Christian Dior’s first boutique — called “Colifichets” — the now-signature motif has been joined by the “Toile de Judy”, designed in collaboration with the Trust Judy Blame foundation and based on the artist’s revolutionary work.

Jewelry designed by Yoon Ahn features reinterpretations of Judy Blame pieces, through metallic elements engraved and embossed with the Dior logo, and adorned with Cannage or lily of the valley motifs.

Berets by House milliner Stephen Jones pay tribute to Parisian culture and the pioneering Buffalo movement of the 1980s. Rich in meaning and creative modernity, this dialogue between the legacies of Dior and Judy Blame affirms, more than ever, the timeless power of savoir-faire.
Watch the video
Credit: Dior