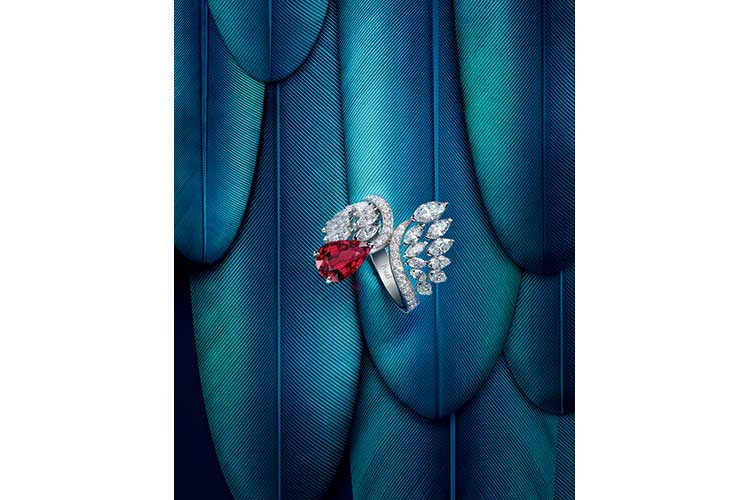 Piaget invites you to join with us on a joyous journey to a fantasy land of magic and mystery, romance and rarity, lifted on the Wings of Light.
Transcending precision and perfection, we soar with the Piaget Bird on its flight of imagination and inventiveness through the tropics, to reach a tranquil oasis of wonder and harmony, where, as the setting sun glows as embers towards dusk, we emerge to celebrate excellence in an explosion and crescendo of exotic brilliance.

The bird wing has long been cherished as a design motif in jewellery through the ages, but here the plumage is realized both with especially high levels of craftsmanship and chromatic creativity. Recreating rich tropical colours, the feather marquetry – by Maître d’Art Nelly Saunier – and the gemsetting work perfectly emulate the plumage of an exotic bird by utilizing, in addition to feathers, a rainbow of differently coloured sapphires and spinel.

At the centre of the Majestic Plumage necklace is a rare and special 7.49 carats tourmaline known as Paraiba (after the State in Brazil where it was first discovered in the 1980s as an entirely new gem). The colours can range from startling turquoise to majestic blue-green, but it is the incandescent glow that appears to light up the stone from within that makes Paraiba tourmalines incomparable to any other gem. They are quite simply some of the most sought after gems in the world, and this one from Mozambique is especially unusual to find in such a size and shape. It shines from the centre and lights up the entire creation.

Form and function are seamlessly combined here in an innovative system developed by Piaget and used for this jewel: the necklace can be worn with or without the feather marquetry element, which can be removed and worn as an ear cuff, or be further divided into two parts to be worn on both ears.

Colour also resonates in the earrings of the same set, this time showcasing the beauty of red spinel, less well known than the ruby but every bit as precious, and so similar to ruby that it was simply known as ‘balas ruby’ right up until modern times when the science of gemmology developed and discerned the difference. These 2.70 carats gems from Tanzania are always talking points and are unusual to see as matching pear-shapes and with a pink blush adding to their rarity and value. With mesmerizing colours of multicoloured sapphires echoed throughout this set, these earrings are expertly articulated to bring comfort and movement, taking over 140 hours in the Piaget atelier to complete.

This combination of the highest quality of both stones and skill repeats in the cocktail ring, a statement piece showcasing remarkable gems which took eight months to source and match. A vibrant, indigo bluecoloured tourmaline, so different from the darker blue-green of more common tourmaline, is teamed with the perfect ‘hot pink’ shade of red in the pear-shaped spinel.

stay tuned with UFASHON to discover "Wings of Light" by Piaget.