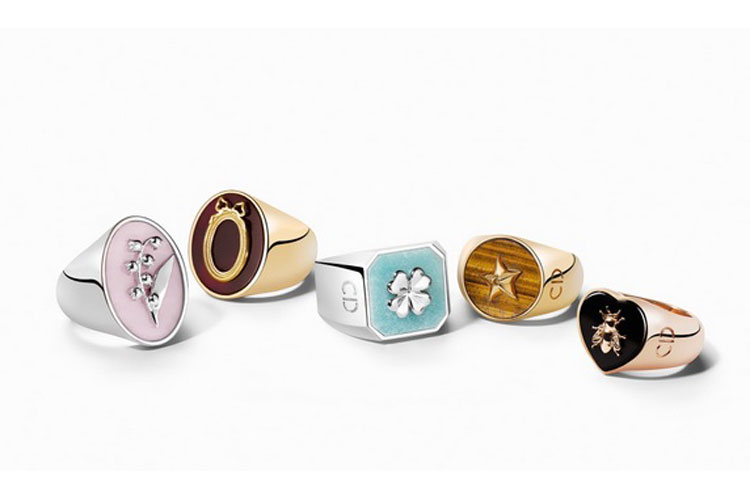 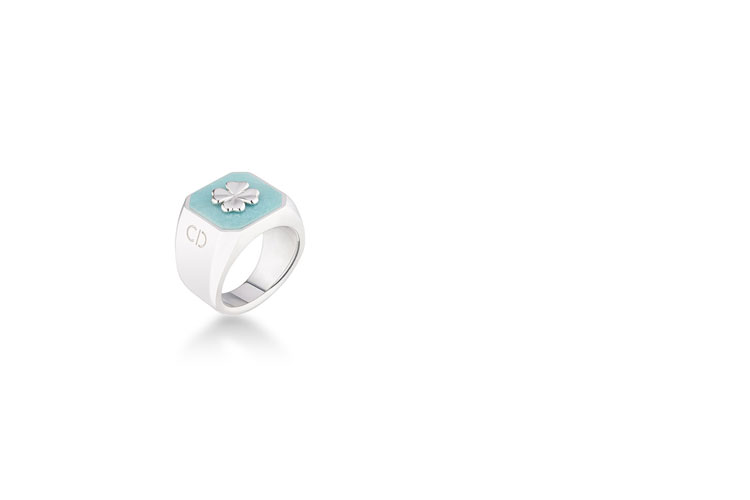 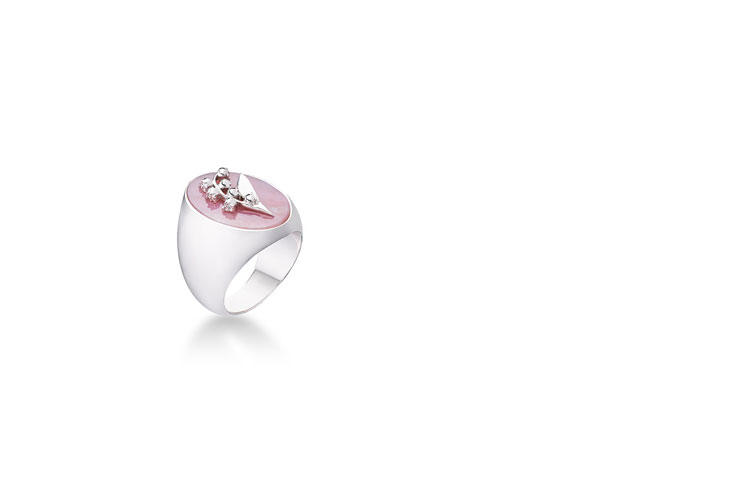 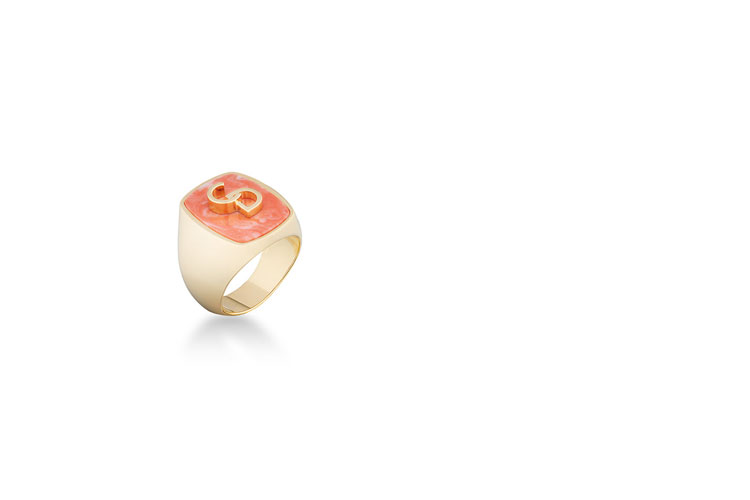 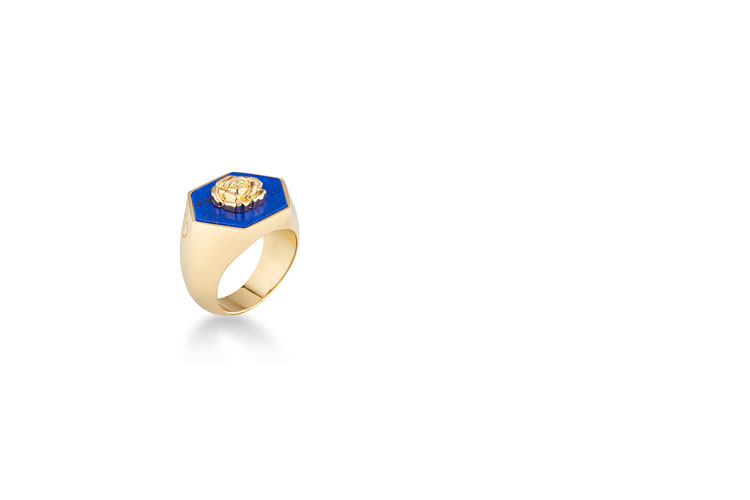 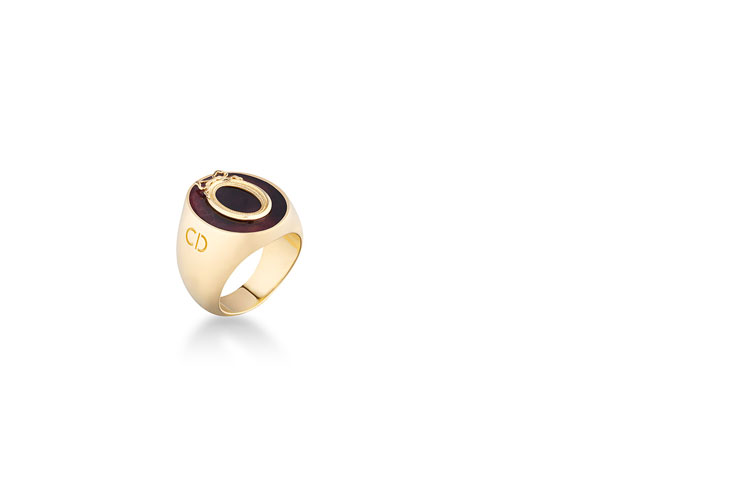 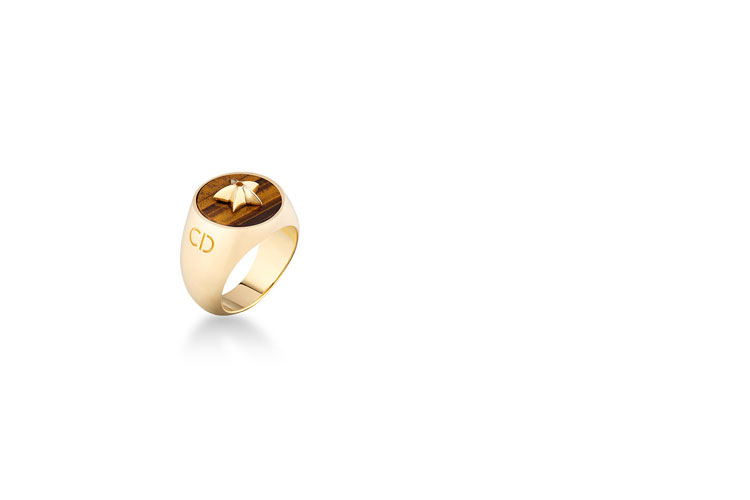 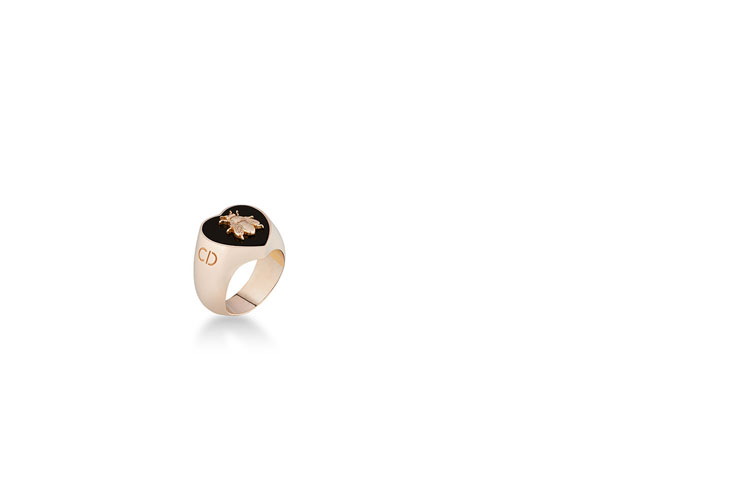 The bee, lily-of-the-valley, four-leaf clover, the rose, star, and oval – in recognition of Christian Dior’s superstitions, the Lucky Dior signet rings come decorated with House emblems to be worn solo or in multiples, becoming lucky charms in their own right. We explore their significance.

The bee.  "A small hive filled to bursting, that's what my house was like when I presented my first collection," Christian Dior wrote in his memoirs. This metaphor for the ateliers at 30 Avenue Montaigne also evokes the activity of the seamstresses who were given the nickname of bees. Meticulous and ever-busy, they worked for the designer like a swarm. The little black and yellow insect, in a modernized and refined embroidery, is the insignia of the Dior Homme collections. Today, the bee is set into the signet ring, contrasting with a deep black onyx that brings strength and vitality.

The lily-of-the-valley.  Highly superstitious, Christian Dior loved the lily-of-the-valley, a symbol of happiness that heralded the arrival of spring and the haute couture. Entranced by its scent and its feminine blooms, he used to sew a dried sprig into the hem of each of his dresses. This flower, which can be found embroidered on House creations, delicately decorates the signet’s love-bringing pale rose quartz.

The clover.  The four-leaf clover was with Monsieur Dior every day in the cluster of charms that he kept in his pocket. Inseparable from this good-luck symbol, the designer attached considerable importance to talismans that guided his destiny. As an amulet, the clover is adorned with a green stone, amazonite, inspiring confidence.

The rose.  A gentle souvenir of his childhood garden at Granville, the rose evokes the love that Christian Dior had for his mother who inspired in him his taste for flowers and feminine elegance. On the signet ring, the rose is finely drawn on a navy blue lapis that offers wisdom.

The star.  Like a sign of fate, the couturier chanced upon a star laying on the ground at the time he was readying to take the decision that would change the course of his life. Christian Dior interpreted this find as a spiritual aid that inspired him to follow his path and open his own couture house. Kept as a lucky charm in his atelier, here it is paired with tiger eye, a protective and radiant brown stone.

The oval.  Fascinated by the elegance of the 18th century, Monsieur Dior bought medallion-back chairs to seat the guests at his shows. Today the emblematic oval topped with a Fontanges bow is a House code. Feminine and sensual, it decorates both boutiques and perfume bottles. On this jewel, it is matched with the elegant plum of fluorite to provide protection and harmony.

The initials.  The Dior signature, the initials "CD" are stamped into a comforting bright red coral. The ring can thus be worn as an emblem of the House.